In August, because so many people were away on holiday or at events, we decided to have 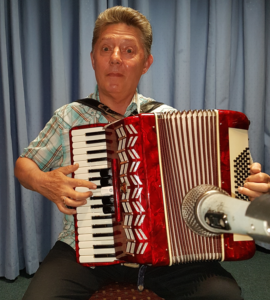 a practice night instead of the usual concert night.  This went down well and was well attended. For those who have not been to a practice night, its not a group of us playing as an accordion band or anything like that, it’s a free for all where players choose a corner of the room to play, chat with others, share tips, fix accordions or just listen to someone else playing. It’s a social night where you can talk as much as you like all night long without disturbing any players. We normally have bob seed in attendance with his drum kit, he sets up in one corner and any player is free to play along with him. He is normally busy all night as various players take turns, or play together, with Bob on the drums.  Its nice that Bob brings his drums, it gives players a chance to get used to playing with a drummer, something that might seem difficult at first, but something that will really bring along their playing. When Bob starts playing it does bring the music alive.  Often you will see a naked accordion in the room at these nights, with two or three people staring at it while tools and lights are used on it. The accordion normally recovers well and its owner is suitably happy that a previously unwell accordion is now playing fine. I always encourage new duets to start up on these nights, and we often see people playing together who you would not normally see together on stage. These nights are good for giving confidence, gaining skills and being comfortable at playing in the club without being the centre of attention on stage. Sometimes people bring other instruments to these nights and play along with other players on their accordions. This is all part of the club experience and I encourage other instruments to duet with an accordion, but we keep it as a free reed club by insisting that other instruments (eg. A guitar, drums, keyboard etc.) are free to play on stage at concert nights if accompanied by an accordion.  If you haven’t been to a practice night before then please try one out in future, you might like it.     David Batty

We know that you will be aware that Bruce Forsyth has recently passed away, so we thought that it would be interesting for you to know that Bruce played the accordion at the age of 14 (pictured) in his Boy Bruce The Mighty Atom act in which he sang, danced, and played the accordion. His first appearance was at the Theatre Royal in Bilston. Bruce  made his television debut in 1939 as a child, singing and dancing on BBC talent show Come and Be Televised, broadcast from Radiolympia, and introduced by Jasmine Bligh.

This Wednesday, we have a local players concert. This is your chance to show us what you can play, we love to hear people on stage, hear what they have learnt, and see their progress over the months or years. For players it’s a good experience to play to a supportive audience.  The doors open on Wednesday night at 7.30pm for a prompt 8pm start.  Please bring along your friends and anyone who might be interested in attending. If you see someone you don’t know then please say hello and make them welcome to the club.  If you see someone in the street you don’t know, please bring them along to the club!

Leveret are in concert on the 5th October 2017 at Band on the Wall, 25 Swan Street, The Northern Quarter, Manchester, Greater Manchester, M4 5JZ.

Leveret features three of England’s finest folk musicians in an exciting new collaboration. Andy Cutting, Sam Sweeney and Rob Harbron are each regarded as masters of their instrument and are involved in numerous collaborations with a huge range of artists.

Leveret’s music is firmly rooted in the English tradition but sounds fresh and new, with original settings of ancient tunes sitting alongside new compositions by some of today’s finest tunesmiths in the folk field.

Fiddler Sam Sweeney is the current BBC Radio 2 Folk Awards ‘Musician of the Year’, thanks to his work in Bellowhead, Eliza Carthy’s Wayward Band, The Full English and his own Made In The Great War project. Melodeon genius Andy Cutting is a two-time winner of that award, and as well as his new trio with Martin Simpson and Nancy Kerr currently performs with Blowzabella, Topette, June Tabor, and Roger Daltry. Concertina wizard Rob Harbron is known for his work with The Full English (Best Group and Best Album BBC Folk Awards 2014), Emma Reid, Fay Hield, Jon Boden and others.

Tickets for the concert range in price form £12 to £16 depending on how early you buy tickets which are available at  www.bandonthewall.org/events/leveret/

An intensive weekend for piano accordion players of all ages and abilities! Intermediate / advanced students will spend a day each working with Murray Grainger and Paul Hutchinson, while Jane Ward will work with beginners making sure all levels get the most from the weekend.

There will be work on technique, repertoire and interpretation of folk tunes in small groups, plus informal evening sessions and a Saturday night tutors’ concert.

Beginners: Jane’s beginners’ group is ideal for those who have played a little; you’ll need a very basic knowledge of your instrument. We work from music, but it would be (and has been) possible for non music readers to learn by ear.

Paul Hutchinson studied piano and church organ before being persuaded at the age of 17 to take up the accordion and form a ceilidh band. Since then he’s become one of the best-known and in demand players on the folk scene – in the UK and beyond – as one half of duo Belshazzar’s Feast, with trio Hoover the Dog, Pagoda Project (with Karen Wimhurst), and PLF. Paul is a regular tutor and musician at Halsway Manor, and the accordion tutor for EFDSS at Cecil Sharp House.

Murray Grainger works with the finest orchestras, pushing the boundaries with his traditional projects or teaching around the UK, Murray is at the forefront of the British accordion scene. Trained in the classical accordion at The Royal Academy of Music, Murray has been a tutor in both classical and folk accordion at Chetham’s School of Music, on Newcastle University’s Folk and Traditional Music course, and as the Director of Education for Young Musicians Stornoway. This will be his third year as a tutor on Halsway Manor’s Accordion Weekend.

Jane Ward has been playing accordion for 50 years. She performed extensively around Europe as lead player in Jenny’s Accordionists, and played in Scottish, German and Polish bands before agreeing to play for a morris side 28 years ago and discovering folk music!

Following in the footsteps of Karen Tweed and Paul Hutchinson, Jane Ward took up the baton to lead the irrepressible No.1 Ladies Accordion Orchestra in 2014. She brings a winning combination of fun, frolics, and delicious musical treats to her Halsway workshops, to make your hearts sing and bring a smile to your face. She also tutors at Canterbury Folk Days, Burwell Bash Summer School, and Cecil Sharp House.

Prices for the weekend are:

£139 Non Resident (all meals except breakfast, and activities)

£149 Camping per person (all meals, and activities)

5th Accordion visit to Castelfidardo in Italy – MAY 2018

Experience a wonderful and interesting 5 days in the lovely areas of Emilia Romagna and Le Marche plus a visit to San Marino.  Dates are between 22-26 May 2018. Travel is from Heathrow on scheduled flight to Bologna and then a luxury coach down the Adriatic coast to Castelfidardo. Lunch stop half way at a vineyard (included)

On arrival at the hotel in Castelfidardo there may be time to visit the Accordion Museum in the town. The following days will include visits to Victoria Accordion showroom where the world’s largest working piano accordion is on display alongside a huge chromatic model. Visits are included to a number of high quality accordion manufacturers to see the various instruments being made by hand.  There is the opportunity to try the latest accordions on display in the respective showrooms.

Optional visits are included to see how reeds are produced and how the bellows are made. A stop at the Carini Accessory Shop will be available and lunch visits to some of the attractive nearby towns such as the pilgrimage town of Loreto, Recanati, Osimo or Macerata.  Our coach can also take those interested to the larger provincial city of Ancona.  We will visit seaside resorts in the evening for dinner and entertainment. Our last night dinner is included where a local guest accordionist will give a performance after dinner.  During our stay we have some accordions loaned to us by some of the manufacturers and group members are able to entertain at the restaurants if they wish and at the hotel.  There have often been some wonderful jam sessions in the hotel bar in the evenings!

Return journey to Bologna we stop for around 4 hours in the independent state of San Marino for sightseeing and lunch and a visit to a shopping centre and huge music shop.

Prices are expected to start around £590 for the 5 days to include:

To add your name to our list for full details please contact Peter Le Geyt  Tel: 020 8977 6680 or email: plg@plgmarketing.com

Conducted by a qualified tutor the course will explain the working parts of the accordion and how the treble and bass switches work and common problems.  Also reed block configurations, voices, how to undertake minor repairs, including valve replacement, sticky keys and switches, changing bellows gasket and general fault finding.  If anyone wishes to bring along an instrument which is need of some attention and can be used as an example then this will be ok providing it is not requiring major work.  During the course some practical work will be possible. Tuning will also be explained with practical example. Materials are provided.