In September we had a local players concert featuring our own players. First to take to his 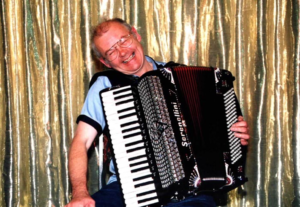 instrument was Bob Seed who manned the drums for the night. Bob accompanied most players starting with Arthur Frankland who played a Finnish Song, this was followed by  Danny Boy, Moscow Nights, Hatikvoh and Fields Of Athenry. Next up was John Robinson playing Hello Mary Lou, Blaydon Races, The Minstrel, Calico Printers Clerk and Floral Dance. It was time for Patrick to entertain us. Patrick started with Seven Spanish Angels, and continued with My Old Country Home, Come By The Hills, Galway Bay and to finish he played O Susannah. We then had the first break of the night with all the socialising that normally happens on the breaks. I then took to the stage with Harvey, we played Can’t Help Falling In Love, My Grandfathers Clock, A Lovely Bunch, Of Coconuts, Waiting At The Church, Beer Barrel Polka and Return To Sorrento. John Robinson was next on the stage, accompanied by Ann Parker on the Ukulele. They played Wimoweh, Rivers Of Babylon and Urban Spaceman.  Our next player was Colin Ensor who gave us Please Don’t Talk About Me When I’m Gone, Conquest Of Paradise, You’ll Never Know, May You Always, Sunshine Of Your Smile, Dancing with Tears In My eyes, Magnolia Wind and Blue Eyes Crying. Sara Daly followed Colin, she played The Broken Pledge, Baby Face,  You Brought A New Kind Of Loving, Friday Harbour, Genevieves Waltz, Midnight Waltz, Too Many Tears and Envikens Waltz. The entertainment continued with Harvey playing Return To Me, Daisy, Maggie, Spanish Eyes, Amanda’s Waltz and Mexican Hat Dance. Bernard Bamber was our next player, he gave us When The Saints, Please Release Me, Goodnight Irene, Heart Of My Heart, When I Grow Too Old To Dream and Show Me The Way To Go Home. Ann Parker was our final player with  Snow Waltz, Lady of Spain, Isle Of Capri and Bluebell Polka.                                                                David Batty

Phil Cunningham presents a three part programme called “Wayfaring Stranger” in which Phil examines Scotland’s contribution to American music. The Programme takes its name from an American anthem that began as a 17th century Scottish border ballad, The Dowie Dens of Yarrow. It was carried, first, to Northern Ireland and then gained new words to its melody as the successors of those who moved from one promised land moved on to another one down what’s known as the Wagon Road, the route that travels down the Appalachian Mountains from Pennsylvania to North Carolina.  The Herald Scotland goes into more detail interviewing Phil about filming the series, the interview can be read at www.heraldscotland.com/arts_ents/15553553.Phil_Cunningham_on_how_Scots_migrants_created_American_music/

All three episode are now on the BBC IPlayer You can watch them at www.bbc.co.uk/iplayer/episodes/b08lnkqn

The first episode expires on the 29th October with the other episodes expiring sometime after this.

This Wednesday, we have a local players concert. This is your chance to show us what you can play, we love to hear people on stage, hear what they have learnt, and see their progress over the months or years. For players it’s a good experience to play to a supportive audience.  The doors open on Wednesday night at 7.30pm for a prompt 8pm start.  Please bring along your friends and anyone who might be interested in attending. If you see someone you don’t know then please say hello and make them welcome to the club.  If you see someone in the street you don’t know, please bring them along to the club!

This course aims to show the range of techniques through tunes and musical arrangements with the emphasis on the English tradition. Classes will be taught using music therefore the ability to read ‘the dots’ is important. This will leave more time to explore different rhythms and harmonies rather than teaching melodies.

Accordion Level 1 – 2 (Absolute beginners / Beginners) – Knowledge of the piano keyboard is useful but how to master the chords and bellows of this wonderful instrument will become apparent as the course unfolds. Tunes will be taught initially by ear, but simple sight-reading skills will be explained during the course. Expect to be able to play at least two tunes with simple accompaniments (major and minor chords) by the end of the first term. During the second term the course will concentrate on how to enhance tunes using the counter bass rows and by using more complex harmonies.  Different styles of accompaniment will also be introduced.

Accordion Level 3-4 (Improvers / Intermediate) – Good music reading skills are advantageous at this level as the tunes are more complex. Exploring different methods to enhance, vary and develop melodies is the central part of this course.

Stagg 32 note Melodica for sale £25.    20 Note Concertina Anglo scholer  made in Germany G/D £40.  Both instruments are well looked after and in  excellent condition. If you are interested in either of these instruments see Harvey at the club.

Held on the 19th & 29th October  2017 the Festival includes performances, participation, entertainment and education in Irish traditions, music, literature, theatre. It reflects the Irish communities ever-growing significance in defining Liverpool as a great European city.  The are over 25 venues with over 55 events going on. Event listings, tickets prices and more details can be found on their website www.liverpoolirishfestival.com

Over the years we have featured stories of members. This is an interview with Harvey that