In July we had a practice night instead of the usual concert night. The reason for this was 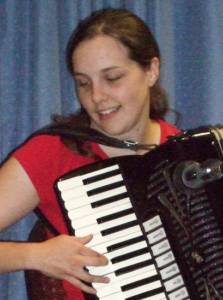 that many people were away on holiday, or at St. Audries Bay Accordion Festival, It made more sense to have a night where players could meet, chat, play and drink coffee all night rather than have an organised concert.  At the practice night we had Bob Seed (who usually brings his drum kit) enjoying playing in the corner with serveral players. Bob was kept busy all night with players wanting to play along with him. It is good practice for players to play along with a drummer on our practice nights because it gives players a challenge keeping up with the tempo. It really is good having Bob to keep players in time with each other. If you haven’t sat in on one of his sessions then you should give it a go some time.

There were many other sessions going on around the room with players forming duets, chatting about a piece of music, drinking coffee and generally having a nice relaxing time.

If you have any old music you want to give away then please bring it along to one of our nights so other players can give it a good home. We keep a pile of donated music by the door for people to look thorough, and hopefully find something they have either been looking for, or something they think looks interesting to play. Thanks to those players who have donated music to others, I often hear someone pleased at finding a piece in the pile that they are looking forward to having a go at playing.

We also see simple accordion repairs being carried out on our practice nights when Colin gets his tools out to fix something, or Bernard gets his tools out to sort out a switch, midi socket or some other electronic problem.  We often get players bringing along new products, interesting finds from second hand shops or accordions they have bought on Ebay.  The practice nights are certainly a good informal night and are always interesting. I look forward to seeing more of you at future practice nights in future.

Ten Years after debuting Brandon McPhee has recorded a CD to commemorate this. The CD is recorded on Will Starr’s famed 3 Row Shand Morino with the dummy Row. This is the first time this accordion has been in a recording studio since Will recorded with it in the 1970s. There will be a  DVD coming soon, recorded on Location in Caithness, The Track listing for the CD is as follows:

This Wednesday, we have a practice night this is an ideal night to meet others at the club. The doors open on Wednesday night at 7.30pm for a prompt 8pm start.  Please bring along your friends and anyone who might be interested in attending. If you see someone you don’t know then please say hello and make them welcome to the club.  If you see someone in the street you don’t know, please bring them along to the club!

Serenading Cows in a Field

Accordionist Sharon Shannon was on a journey to Cork when she stopped off on the way in Waterford, there happened to be a herd of cows in a field when Sharon decided to serenade the cows, the impromptu concert was filmed… at the beginning of the video  the Cows are dotted all the round the field as soon as Sharon starts playing the intrigued cows make they way over to investigate the music. Soon the majority of the cows are crowded around listening to the music. Sharon posted the video to her facebook page on the following link. https://www.facebook.com/sharon.shannon1/videos/vb.201656216525834/1587316364626472/?type=2&theater

South Craven Orchestra are having a joint concert with the Orchester Musika Akkordia from Berlin on the 19th August at Skipton Town Hall starting at 8pm. The two orchestras will play individual items from their repertoires as well as joining together under musical director Bob Nevin. Tickets cost £7 Adults and £5 for Concessions. To book call 07401 768356 or 01756 792809 or Email cravenschoolofmusic@hotmail.co.uk

How To Mic An Accordion

Recording or amplifying an accordion properly is an art. There are problems with the wide range of frequencies produced by the instrument, to overcome this you need to choose a microphone with the correct frequency response to handle accordion reeds. Apart from the frequency response you need to think about microphone placement, the sound comes out of  various places on two sides of the accordion (and one of the sides is moving while the other is static). The following web page on how to do the job properly is produced by Shure who are leaders in microphone technology.

London Accordion Orchestra are putting on a concert with the Accordion State Youth Orchestra, Baden-Wurttemberg Germany. The Concert is taking place on Sunday 3rd September 4pm – 6:30pm at the Diorama Arts Centre in London.

The Accordion State Youth Orchestra has performed on all 5 continents including concerts in USA, Canada, Russia, China, Brazil, South Africa, Namibia, Costa Rica, New Zealand, Fiji and India. Their repertoire is varied and includes contemporary original music for accordion, as well as classical and folcloristic works.  Tickets cost £10.67 and can be purchased from https://www.eventbrite.ca/e/bellows-across-borders-london-accordion-orchestra-at-diorama-arts-centre-tickets-34752823631

Taking place on the 7th – 10th September 2017 Heritage Open Days sees Venues and groups/history talks offer free tours, talks and experience. There will be a number of experience that are normally not open to the public at other times of the year and tours or venue that normally charge an entrance fee offering free entry for this weekend. There are thousands of things going on round the country to see what is nearby visit www.heritageopendays.org.uk

Music on top of Old Man of Hoy

David Greenald from Chester climbed The Old Man of Hoy a famous sea stack in Orkney on 20th June.  The Climb to the top took eight hours which David who has 50 years climbing experience climbed with a group of Friends, the team hauled the accordion up part of the way with David carrying the Accordion on his back up pitches three and four where Karl Smith carried the accordion up pitch five. David said the climb was “personal pilgrimage, I had a vision of playing an instrument on top of the Old Man decades ago, just as a nice thing to do. But when this opportunity came along, it suddenly occurred to me that I could take my accordion and play a few tunes.”  At the top David played his own composition which he said was “Northern Sounding” the tune was significant because he had played it at the funerals of both his parents, he said playing it at the top of the Old Man of Hoy would give them an appropriate send-off. David also played Una Furtiva Lagrima by Donnezetti while at the top. Since the climb David has written a lament about the Old Man of Hoy and called it Let The Wild Wind.

Its almost time for the Great Dorset Steam Fair to open its gates. The event is an annual event held in Dorset (which is a long way from Leyland but its well worth a visit).  The event features not only steam attractions but a lot of music and other attractions. The Wurzels are regular performers at the event which features several music tents with different acts going on at the same time.  The event runs from the 24th to the 28th of August at Tarrant Hinton.  For further details of the event, opening times, ticket prices etc. visit their website at http://www.gdsf.co.uk/

Register Symbols And Their Meanings

Here are some common register symbols that you might find on your accordion, along with their name, the stops in use and a description of the sound. 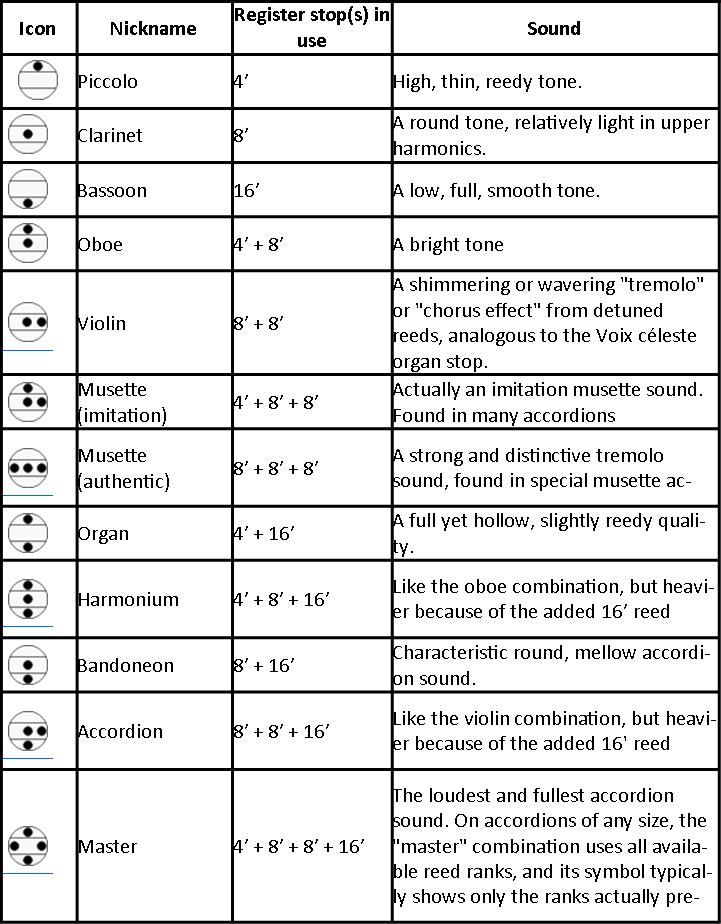