Our June concert started with  Colin Ensor playing Domino, Getting Sentimental Over You 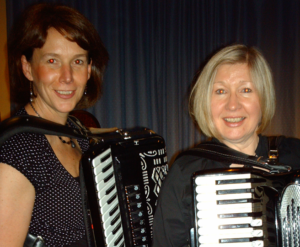 and Charmaine. On next was Bernard Bamber. Bernard started with Blaydon Races, he then continued with Maggie and Scotland The Brave.  To lead us up to our guest artist spot we heard Helen Rich playing Trieste Overture and All Hands Forward. It was now time for our guest artist spot with Julie Best and Jean Corrighan. Julie and Jean have played at the club many times before, and they are always welcome back. They started their first spot of the night playing Fleur Du Jura. After a quick chat with the audience  they continued their first spot of the evening with Accordion Trophee, Morning Has Broken, Polka Bouquet, Jaqueline Waltz and Bluebird. The accordion standard Under The Double Eagle was next, followed by Cuckoo Waltz.  Julie and Jean were then joined on stage by Helen Rich on Fiddle. The trio played Craica Clashmore Orange & Blue and The boys Of Blue Hill. Julie and Jean then continued with a medley of Frances MCD, Boys of the Mhairil and several other tunes. After the medley we continued with The Accordionist, I know Him So Well, Sway, Piccolo Camino and Balade Matinale. It was now time for our break, where we had some cakes kindly made for us by Gladys Rigby. After the break we continued with myself playing I played Can’t Help Falling In Love, then I was joined on stage by Rebecca, we played a duet of Plaisir D’Amour. Our next player was Graham Driver, he played Odd Sheepskins, Upton On Severn Stick Dance and Weasels Revenge. To lead us up to the return of our guest artists Ann Parker played Snow Waltz. It was time for our guests to return to the stage, Julie and Jean started their second spot of the night with Anchors Aweigh, Tulips From Amsterdam and Wonderful Copenhagen. Their next tune Swedish Rhapsody was followed by  Bellevalsen and Borje’s Pollka. Jean had a rest while Julie played some solo pieces consisting of Bel Viso and Carolina Moon. Julie then took a back seat while Jean played Tango Por Una Cabeza. Besame Muncho and Rio Rita.  Julie then joined Jean again and the pair played  The Maigret Theme and Eye Level (which was the theme tune to Van Der Valk). To finish the night they played Schneestrurm and a Roll Out The Barrel medley, finally finishing with Dantesque. Once again it had been a great night from Julie and Jean, we went away having experienced a great night of entertainment.  David Batty

In June Brandon McPhee performed at Buckingham Palace along with other Scottish Accordionists for an invited Audience which included Prince Charles and Camilla. Brandon said “This was a huge honour for me, a memory I will never forget and was great meeting up with old musical friends and delighted to have made some new ones too.”

Held in Ennis, Ireland from the 13th – 21st August There will be 30+ concerts, 16 lectures and Various other events. If you are not attending the event but would still like to see some of the goings on, Fleadh TV will be broadcasting from the 18th – 20th August between 8:30pm – 11:30pm you can watch live on TG4 (Irish TV Channel) or if you are in the UK you can watch on their website at www.fleadhcheoil.ie  If you are thinking of attending the festival, a schedule and tickets prices can be found on their website www.fleadhcheoil.ie

This Wednesday, due to many people being on holiday, we have a practice night rather than a concert night. This is an ideal night to meet others at the club. The doors open on Wednesday night at 7.30pm for a prompt 8pm start.  Please bring along your friends and anyone who might be interested in attending. If you see someone you don’t know then please say hello and make them welcome to the club.  If you see someone in the street you don’t know, please bring them along to the club!

If you were a fan of Black and White films and public Information films, Talking Pictures TV are bringing these back broadcasting rarest gems from British film history and films from the vaults of Pinewood, Twickenham and Shepperton Studios to present a wide variety of nostalgic treats. Talking Pictures TV is available on Virgin 445, Freesat 306, Freeview Channel 81, Youview 81 or on Sky channel 343. I have really enjoyed watching many old films from the 30’s to the 70’s. This is a great channel. Visit www.talkingpicturestv.co.uk to see the full  schedule.

Accordion on the Race Track

Red Bull Racing decided it would be interesting to take an Accordionists drifting round a race track in Austria just before the Austrian Grand Prix starts. The drivers were the Red Bull Driftbrothers Joe and Elias Hountondji they were driving a heavily modified BMW 3 Series and Nissan 200SX, Joe was driving the Nissan with the Accordionist. Despite all the G forces, the smoke from the tyres drifting on the track and the cramped seating the Austrian Accordionist was still able to play and Red Bull have video to prove it. They uploaded video from inside the car of the accordionist to their YouTube Channel  www.youtube.com/watch?v=Qm9QP1yprYU visiting the above link will take you straight to the video.

In recent years, Fisitalia has expanded their high quality model range, an important

addition being the compact piano-converter-model (BAYAN-EVO – see “akkordeon-magazin” issue 02/13). Now this young accordion manufacturer from Castelfidardo is releasing a new model. The single-tone accordion for the professional musician in an ergonomic design: BAYAN-ERGO.

Due to further development of the Stradella bass (pure standard bass accordion in the 70s) adding the converter model, the accordion gained a significant boost for artistic playing. More and more compositions were created for the improved accordion with several octaves of bass. In the meantime, the teaching/playing of the convertor accordion is a prerequisite for a successful study at a music colleges.

By the 1980s, some tutors tried to create further distance from the standard bass mechanics and to develop the pure Melodiebass (free bass) accordion. But the feeling of the bass was not the same as the treble, as the bass note-board was not intended for single-note playing with the thumb, with the bass note-board being initially designed for standard bass. The accordionists stayed with the converter model.

The advantages of the BAYAN-ERGO are based on its detail:

The clearly slanted bass side and the larger bass buttons allow the player to have better and more natural hand and finger position, thus facilitating easier performance. Due to this structural change, the thumb can also be used, and it is possible to apply the same way of playing for the left hand as for the right hand.

Some players are already using a conventional converter model, but have to “force” the thumb into an unnatural attitude. In this way, chronic reorientations of the thumb base and thumb saddle joint are virtually pre-programmed, especially for beginners. In case of a long lasting rehearsal or practice, this might lead to premature joint wear and stress, which can often be felt only after many years. Such problems can be prevented by an ergonomically revised accordion. Apart from this, there are also clear advantages in terms of playing technique:

1) Easier and freer hand movement and glissandi are possible;
2) The legato performance is significantly easier than on a conventional converter accordion, especially with two-part music;
3) Greater span of the left hand if the thumb is also used; and thumb does not have to be twisted;

4) The thumb can, with sufficient exercise reach up to the fifth row and that makes playing easier, because the player has increased reach;

5) Five-part chords in the left hand are possible;
6) Musical passages equal in the treble and bass can be played with the same fingerings. This also offers advantages when arranging a new work. This of course does not apply for piano models or convertor accordions in the Russian B system, where the low notes of the bass side are down.
7) Lowest tone in the bass: Contra-C (in accordance with an organ or a harmonium), thus organ works are also playable, which presuppose a range of notes to the Contra-C.
8) Composers have no longer to renounce the fifth finger of the left hand for their works;

Other technical advantages of the BAYAN-ERGO compared to a normal converter model are, without a doubt, the no quieter bass mechanism.
Due to the lack of standard bass mechanics, unnecessary metal pins no longer cause noise. Instead, the valves are actuated more directly with less resistance, makes playing easier with this quicker response. Metal noise from a converter can be dampened, however, depending on the use of the instrument, a few years later, there can be costly maintenance required.

1) Chords must be taken out;

2) A short adaptation period is necessary for the conversion to the new system.

Fisitalia and Fisitalia-Germany have now decided to launch an “Ergonomic Line” series (abbreviated as: ERGO) and to create another button model of medium size so that younger/smaller students can learn this new ergonomic system. It is not yet definitely decided, which accordion models are included in this new line.

This development for an accordion construction is not really a new idea, as Giovanni Gagliardi (1882-1964), an Italian accordionist and composer from Castelvetro Piacentino (region: Emilia-Romagna), already had the idea of ​​a pure single-tone accordion in 1910. Unfortunately, the time for single-tone music was not yet entirely studied and his dream therefore was soon forgotten. Even in the 1980s, the single-tone playing was not as pronounced as it is today, so that the production with that particular bass system never continued.

We believe, that anybody who would like to develop further should always be openly minded towards new ideas, especially if the final goal is not yet reached for “habit makes mistakes acceptable, which we have lived since our youth,” as the German poet Christian Fürchtegott Gellert writes in his poem from the year 1769. Moreover, these new models would simply have had more time to “be”, as was the case with the development of the single-tone literature.

A model from our “Ergonomic-Line” series has a lot more advantages than disadvantages of the demanding single-tone player, which will change / improve the way of playing and give composers further technical possibilities. The BAYAN-ERGO model gives a voluminous sound with an optimal response and a new range of notes, which extends to the Contra-C.

A video documenting the benefits of this instrument will soon be available on the Fisitalia website (see below for contact details).

Of course, every technical change for the accordionist means that he/she has to get used to the new system. But with a bit of practice, this ERGO system is very useable and the standard bass chords will soon no longer be missed. Previously, a button accordion in the treble was also played with only four fingers. Meanwhile, the necessity of the thumb has been recognized. Why should one not use all ten fingers – if we have them?

For standard bass literature, playing without a thumb is perfectly adequate and the pitch of the bass grip board fits exactly. However, if the thumb is also used for the relevant literature, an ergonomic model is the only and correct instrument. For a pianist, it is a matter of course to extract the chords with the left hand, and it can also play entertainment music. That’s why we see no reason to insist on the standard bass if its rarely used anyway, or the performer is focused on single-tone compositions only.