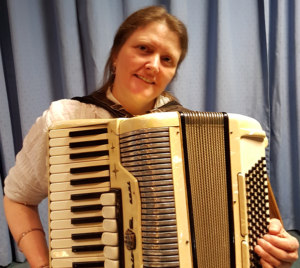 Our May concert started with John Lennox and Harvey playing Lady Is A Tramp, John Peel, Home on the Range and Happy Wanderer. Our next player was Sara Daly playing Shine on Harvest moon, Sunny Side Of The Street, It Had To Be You and My Heart Belongs To Daddy. I was next on to the stage (playing the accordion) while Harvey played the Melodica. Our duet started with Grandfathers Clock, we then went on to play American Patrol, Dixie, and On Top Of Old Smoky. The next player was John Robinson playing The Lion Sleeps Tonight, Whistling Gypsy, The Minstral and Manchester Rambler. It was now our break time and time for everyone to catch up with each other. After the break we started the second spot of the night with Colin Dunscombe making his debut at the club. Colin started by playing The Old Dungannon Oak, then he continued with Trumpet Voluntary, Blue Moon, My Tyrol and Blue Bell Polka. Patrick Halpin was up next, Patrick started with Seven Spanish Angels, this was followed by Come By The Hills, Stancil Hill, I Wish I Was In a Mountain Hide and Wild Colonial Boy. Our next player was not playing an accordion but was on a concertina, although we are an accordion club we look at any free reed instrument on an equal par with the accordion, this includes concertinas and melodeons. Liz Tait took her Concertina to the stage and gave us great renditions of playing Ashleys Rise, Potted Peas, British Grenadiers, Winham’s Wheel, A Sea Shanty and Sailors Hornpipe. Harvey then joined Liz, the pair played Gallopede, Portsmouth, British Grenadiers, Whinham’s Reel, Huntsman’s Curres and Buttered Peas. Our next player was Rebecca playing Home On The Range, My Wild Irish Rose, moon River and La Valse De Ameile. Rebecca was followed by Ann Parker playing Snow Waltz and Beautiful Days. To take us up to the end of the night I played Beer Barrel Polka, Oslo Waltz, Black Mask Waltz and Now Is The Hour.

The line up includes: Marco de Guiseppe from Italy, Mr Boom from the Moon, Have A Banana One Man Band and Chucklefoot. The event is free and takes place on the 23rd July.

Contact David on 01772 454328 david@accordionclub.co.uk or ask to play the accordion at Leyland Accordion Club. 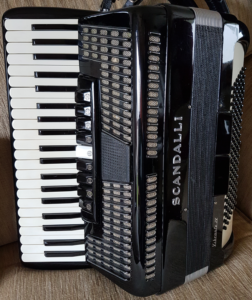 This Wednesday we have the return of Julie Best and Jean. This duo have been firm favourites at the club for years, and they never fail to entertain us with new material. If you want a great night out then don’t miss the club on Wednesday!

One or two members have said they hadn’t realised that they could play another instruments at the club, we do have an Accordion only rule but other instruments are welcome on concert nights at the club so long as they are accompanied by an Accordion. This helps to keep the club an Accordion club but also strikes a fair balance.  This is why we have a “Show your other Talent” night at the Christmas party  to give everyone an opportunity to show off other talents they have without having to be accompanied by an Accordion. If you play another instrument then why not team up with an accordionist to play some duets at the club. Time to dig out your tin whistle, harmonica, or whatever you play and find someone to duet with you.

If you were a fan of listening to shortwave radio in the past, but don’t have a shortwave set now, then you can start listening again by visiting http://websdr.ewi.utwente.nl:8901/

On this page you can tune a shortwave radio up to 30mhz, the aerial and receiver is located in Holland.  But you can operate it and listen remotely Last week I transmitted a signal from my home in Leyland and immediately heard myself on the radio on this site in Holland. It’s a great site for exploring without having to buy or set up a radio set or aerial and if you zoom in close on commercial bands it tells you which commercial channel is broadcasting that signal.

Paul Hutchinson is leading an Accordion for Beginners course on the 17th July – 21st July This is a morning course which runs from 9.15am to 12.15pm. Accordions can be supplied for the duration of the course if you do not have your own. By the end of the five day course beginners will be familiar with the piano accordion. All students will be able to play simple tunes using both hands. Some keyboard skills and an ability to read music would be advantageous.

Monday – Introduction to the instrument; explanation and demonstration of the left hand chord layout, a chord diagram will be provided.

Tuesday – A simple tune will be taught with a basic left hand accompaniment using major chords only.

Wednesday – How to use the bellows more effectively: dynamics and note shaping using the tune learned on day two with an introduction to the counterbass row (major 3rds).

Thursday – A tune in a minor key will be taught involving more complex chords. This will involve the transition between major and minor chords.

The cost of attending this course is £225 to book and for more information visit www.summerschool.co.uk and search for “Accordion” alternatively telephone 01672 892388.

This course is for 12 – 17 Year olds. The teachers for this course are Djordje Gajic and Paul Chamberlain. The course covers Daily Warm-ups, Technique class, Individual Lessons, Ensemble Class, Performance Class, Supervised Practice and Performances. The course takes place in Glasgow on the 31st July – 4th August and costs £245 To book and for more information visit www.rcs.ac.uk/lifelong-learning/accordion or Telephone 0141 332 4101

Taking place in Isle Of Skye, Scotland from the 17th July to 21st July Tutored by Addie Harper Jnr. In this 5 day course for all abilities you will have the opportunity to learn tunes, techniques, harmonies and chords from Caithness virtuoso Addie Harper Jnr.  Addie is in regular demand as a tutor and performer throughout Scotland and beyond and he has become a firm favourite of the SMO Summer Short Courses. Addie hails from a famous musical family and those who take his course find he creates a relaxed and encouraging atmosphere, enjoying his calm instruction and patience and as such, he regularly draws students from all quarters, As part of the course, students are expected to perform together at the Thursday night cèilidh at the College and although this may seem daunting for some, Addie ensures that everyone who wants to can take part on stage with the group no matter what stage they are at. As this course is running the same week as the Button Box course at SMO with Fergie MacDonald and Robert Nairn, there will be plenty of opportunity to play with other box players and indeed a chance to hear 3 of Scotland’s finest box players in a special night of music during the course week. The Course costs £250 to book visit www.smo.uhi.ac.uk/en/cursaichean/cursaichean-goirid/accordion-17-07-2017 or telephone 01471 888000

Week 2 of the Dartington Summer School on the  5th – 12th August Contains an Accordion workshop with Paul Hutchinson. The description of the workshop is “The wonderful accordionist Paul Hutchinson tutors at Cecil Sharp House and Folkworks in Durham. Paul’s style of teaching is relaxed and entertaining. He considers the accordion a beautiful and versatile instrument, uses block chords, drones and pedal notes, and is a master of harmony. Paul enjoys developing the potential of a group to deepen and improve their musicianship, and welcomes players at all levels.”  The are a number of other workshops during this week such as Vocal Workshops, Acting For Opera Singers, Crime Writing and other writing and musical workshops a full list can be found on their website. The cost of the week is £440  There is opportunity to book individual courses at £120 per course per week but these spaces are limited and can only be booked over the phone on 01803 847080. For more information and to book visit www.dartington.org/whats-on/summer-school/courses/

Staff at a local charity shop were delighted when a customer returned an accordion.

John Edwards bought the worn and unusable accordion from Chest Heart & Stroke Scotland’s shop at 77 High Street just weeks earlier. However, he brought back a revamped version for donation.

She said: “At first I though he was just returning the accordion but then I saw the incredible work he’d put into restoring it. It was so kind of him to do that then donate it back now that it’s of more value.”

He said: “It feels good to make a donation and they are all very nice in the Forres shop. My wife was a sister so she likes to support them too.”

John paid £30 for the instrument with a shelf price of £25. Having learned how to play classical music on accordion 10 years ago, he has been collecting them ever since.

He said: “Many of the accordions are in a terrible state but I enjoy fixing them. They are often found in lofts where they can swell up. My friend and I pull them apart and repair them. Parts can be a problem but we buy old instruments and use their parts, or send away for what we need.

“At one point I had 150 accordions but they took up too much space so I sold most of them, some to players and collectors in Romania.”

John discovered the one he picked up from the Forres charity shop was made in Saxon, Germany, in the 1930’s. He added: “It wasn’t playable as it had seized up but I’ve tidied it up and fixed it so it can be played now. It cost be nothing but a couple of nights of my time – I don’t need it so I donated it back.”

Ms Murray thinks John is a great example of the generosity her shop gets from the local community.

She said: “I can’t thank Mr Edwards enough for his kind donation. He’s a real inspiration in the support that he gives to charity.

“All money raised in the shop helps to support those with chest, heart and stroke illness to take their lives back.”

A charity spokeswoman confirmed the restored accordion was only in the window for 15 minutes before it was sold again.