Our April concert was a local players concert, which was affected by a six hour closure of the M6 motorway turnoff at Leyland, it was a quiet start while people drifted in after being stuck in traffic. We started the night off with Bob Seed on the drums and Harvey Seager on the accordion, playing Home On The Range, Ashgrove, Early Morning and Maggie, he continued with Grandfathers Clock, Spanish Eyes, Mexican Hat Dance, Flower Of Scotland, Daisy Bell, I’ll Be Your Sweetheart and Under The Bridges Of Paris. Bob Seed stayed on the drums for almost all of the night, supporting players who took to the stage, he did a fine job and must have gone home feeling he had played for a week, he was working hard all night, well done Bob. Up next was John Robinson playing Rare Old Mountain Dew, Whistling Gypsy, Blaydon Races, Wooden Heart, Black Velvet Band and The Green Fields Of France.  Our next player was Ann Parker playing Snow Waltz and The Frog Chorus.   We were then treated to some Irish music from Patrick Halpin, he started with The Irish National Anthem, followed by Will You Go Lassie Go, Spancil Hill, Rody Mcordie and, to finish, he played Red River Valley. Gordon was our next player, he started with La Moyee, then played Vienna Forever. Gordon continued his spot with Marie, In A Continental Mood, Polly Wolly Doodle, Much Wenlock and Corinne. The next player to take the stage was Reuben Hickinbotham, Reuben started with Young and Foolish, he then continued the entertainment with All Of Me, It Had To be You, The Best Things In Life Are Free, Night And Day, Don’t Fence Me In, My Heart Belongs To Daddy and Begin The Beguine. It was time for Colin Ensor to stop recording the tunes people played and take to the stage himself. Colin always writes down the tunes so we have a record for the newsletter and for ideas for others who are wondering what they can play.  As well as being good at writing down the tunes, he is good at spotting mistakes in the newsletter. So I make sure there are non!  Colon started his spot with Please Don’t Talk About Me When I’m Gone, Little Old Wine Drinker Me, Sally, The Town I Loved So Well, Ashokan Farewell, Once In A While, O Sole Mio and Sorrento. To finish the night I did my spot, so I invited Harvey Seagar to join me, we then had a trio of myself on accordion, Harvey Seagar (on the Melodica) and Bob Seed on drums.  Bob Seed said play something upbeat, so we played upbeat versions of Grandfathers Clock, Cuckoo Waltz and American Patrol.     David Batty

The Blackpool Tower Ballroom is home to what must be the most famous and most played Wurlitzer organ in the world and Phil Kelsall has now completed his 40th year, presiding at the Wurlitzer as principal resident organist. In recognition of Phil’s contribution to the world of theatre organ music, The Blackpool Tower Ballroom is presenting a special 40th anniversary concert, a rare opportunity to hear Phil play a full concert on the Mightily Wurlitzer.
The night will be compared by BBC Radio 2’s The Organist Entertains, Nigel Ogden.  The concert takes place on Sunday 18th June 2017 from 6pm to 9pm Tickets cost £14.95 Per Person or VIP (no restricted view) cost £19.95. Merlin Annual Pass holders will get 20% off ticket prices.   To Purchase tickets you can visit their website at www.theblackpooltower.com, or for more information telephone 01253 629236.

I have updated our Android application, if you have an android phone you will find it in Google Play Store, if you already have it installed then it will automatically  update itself on your phone.

This Wednesday is a local players concert featuring our local talent. Please make sure you bring your instrument, whether you know one tune, or thousands. We want to hear as many people as possible, every player inspires someone else to play something. The doors open on Wednesday night at 7.30pm for a prompt 8pm start.  Please bring along your friends and anyone who might be interested in attending. If you see someone you don’t know then please say hello and make them welcome to the club.  If you see someone in the street you don’t know, please bring them along to the club!

See you there…  David Batty

The Colonel Bogey March is a popular march that was composed in 1914 by Lieutenant F. J. Ricketts, a British Army bandmaster who later became the director of music for the Royal Marines at Plymouth.  Since at that time service personnel were not encouraged to have professional lives outside the armed forces, British Army bandmaster F. J. Ricketts published “Colonel Bogey” and his other compositions under the pseudonym Kenneth Alford. Supposedly, the tune was inspired by a military man and golfer who whistled a characteristic two-note phrase (a descending minor third interval) instead of shouting “Fore!” It is this descending interval that begins each line of the melody.  The River Kwai March was composed by Malcom Arnold in 1957 for the film The Bridge on the River Kwai set during WWII. Malcolm Arnold wrote The River Kwai March as a counter March to the Colonel Bogey March. The two marches were recorded together by Mitch Miller as “March from the River Kwai – Colonel Bogey.” Consequently, the “Colonel Bogey March” is often miscredited as “River Kwai March.” While Arnold did use “Colonel Bogey” in his score for the film, it was only the first theme and a bit of the second theme of “Colonel Bogey,” whistled unaccompanied by the British prisoners several times as they marched into the prison camp. Since the film depicted prisoners of war held under inhumane conditions by the Japanese, Canadian officials were embarrassed in May 1980, when a military band played “Colonel Bogey” during a visit to Ottawa by Japanese prime minister Masayoshi Ōhira. André Rieu gets it wrong the other way, he says the orchestra is going to play River Kwai March, but then they play Colonel Bogey instead!

It can be difficult thinking of what to play on the accordion, you could randomly think of tunes, but then find that they don’t suit the accordion.  One way to think of tunes is to read our newsletters and find out what people played on the concert nights. We always put a list of tunes on the front page of the newsletter and I know that many people use this list for ideas of what to play, or to get the title of a tune they heard someone play at the club.  I have automated this process now, for people who own an Amazon Echo, an Amazon Echo Dot, or a Fire TV Stick (The right Fire TV Stick to buy is the new updated one, you will find it for £39 at http://amzn.to/2oFh2IL ). These devices sit in your house and are controlled using your voice, they act like a personal assistant, educating you, informing you, turning your lights on or off or doing a multitude of tasks. If you have one of these devices (every home will have something similar in future) then you can say ‘Run Accordion Playlist’, and it will suggest four tunes you could play on the accordion, ask it again and it will generate another suggestion of four randomly picked tunes. These tunes were all played by someone at Leyland Accordion club, and are all suitable for playing on the accordion.  I have put a demonstration video on our website at www.accordionclub.co.uk for those of you who don’t have one of these devices. This video shows my Accordion Playlist skill (skill is the name given to the type of thing I have written) running on the Amazon Echo, if you have one of the new Fire TV sticks which  came out in April 2017, then it also works on there (and the tune suggestions come up on your tv screen too.  You won’t be able to play all the tunes it suggests, but you can ask for another list, and another, until you have a list of ideas you think you could have a go at. If you don’t know what I am talking about,  just go and watch, and listen to the video on our website. 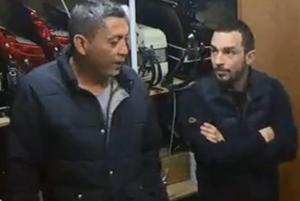 increased security, This is the fourth time they have been targeted since August 2016. Police have released more CCTV images of men they would like to speak to. Burglars forced their way into the Piano and Accordion shop on London Road in Sunningdale in the early hours of Sunday morning 23rd April 2017.

In August 2016 the first of the break in’s at the shop £130,000 worth of accordions were taken.  The second incident happened on Monday 30th January this year at about 2.10am when offenders tried to gain access to the store but failed. Nothing was taken this time. The third incident happened at about 2.40am on Friday 4 February this year. Offenders gained entry to the property by removing a window frame and damaging security shutters. The offenders then stole a total of £20,000 worth of accordions. In the most recent burglary 8 accordions were taken, including, Bugari Evo Black Piano

The above Accordions are missing their Power packs.

Police issued a statement “We are releasing a new CCTV image of two men who might have vital information about the most recent burglary at the shop. If you are the men, or know who they are, please come forward by calling police on 101 and quoting reference 43170116386. If you recognise the men in the other CCTV images please also contact police. If you do not want to speak directly to the police you can contact the independent charity Crimestoppers anonymously on 0800 555 111. No personal details are taken, information is not traced or recorded and you will not go to court.” – Investigating officer, Andrew Corbett of Local CID

Presented by Classical Accordionist Bartek Glowacki, this programme spans nearly 300 years of music featuring the Accordion.
Bartek’s programme of music will take you from the high-octane rhythms of Nelson’s My Inner Disco to the heady Argentinian harmonies of Piazzolla’s Five Tango Sensations, from the mountains of Bulgaria to the depths of Trojan’s The Ruined Cathedral, the only certainty is that you won’t ever look at the accordion in the same way again.
This programme also offers an unmissable opportunity to hear Rakhi Singh, Music Director of the Collective, as a concerto soloist. She will combine forces with Bartek to present Vivaldi’s haunting Concerto for Violin and Organ in D minor, RV 541. The Artists performing are: Bartosz Glowacki on Classical Accordion, Rakhi Singh on Violin, Simmy Singh on Violin, Ali Vennart on Viola and Adam Szabo on Cello. The Programme of music for the evening is:

There are three concert dates at three venues:

Tickets cost £12 at all venues  To buy tickets visit www.manchestercollective.co.uk/the-accordion

Chester Accordion Club’s next meeting is on Tuesday 30th May at The Groves Club, Chester Road (A5032), Whitby, Ellesmere Port, Cheshire. Telephone Barry Graham on 01978 760065.