Night of The Year, Que Sera Sera, Snow Waltz, Beautiful Dreamer, On Top Old Smoky and Highland Cathedral. Our next players were Harvey Seager and John Lennox, they played Arrivederci Roma, O Sole Mio, Bridges Of Paris, Cockles and Mussels, Tulips From Amsterdam, Those Were The Days and Delilah. Next on to the stage was Bernard Bamber playing I Love A Lassie, Roaming In The Gloaming, Bonny Banks Of Loch Lomond, Maggie, I Belong To Glasgow, Flower Of Scotland and Scotland the Brave . It was now time for the break, and the usual chat and socialising normally seen at the break. After the break we started with Ann Parker playing Snow Waltz, Frog Chorus, Romanze, Chopsticks and Funiculi Funicula. It was Colin Ensors turn to play next, she started with   Down Forget Me Not Lane, Maigret Theme, Crazy, Dark Island and Charmaine. Rebecca was our next playing, she gave us Largo, Moon River, Valse Continental and Home On The Range. After Rebecca, John Lennox gave us great renditions of La Vie En Rose, Je Ne Regrette Rien and Come To The Cabaret. To take us up to the break Harvey Seager played Daisy, D’Ye Ken John Peel, The Happy Wanderer and Maggie. We had the second break of the night like we always do on local players nights, then continued our last section of the evening, starting with Reuben Higginbotham playing Young and Foolish, All Of Me, It Had To Be You, The Best Things In Life Are Free, I Love Paris, Lets Do It, Night And Day, You’d Be So Nice To Come Home To, You Do Something To Me and Softly As In A Morning Sunrise. Sara Daly finished the night playing Rose Of Tralee, Emma & Jamie’s wedding, Please Don’t Talk About Me When I’m Gone, Granddaughters Dream, I’m Confessing That I Love You and You Brought A New Kind Of Loving To Me.  I was sorry that I couldn’t make it to the January concert, I was away with work, and it was too far to return to Leyland. I will be at this Wednesdays meeting though, I look forward to seeing you there.  David Batty

John Eatock – The guitarist in The Fettlers

Our Condolences are with John’s Family and friends at this sad time, John sadly passed away last week.  He was a favourite at Leyland Accordion Club, when along with Michael Joyce, they entertained us with their great mix of Lancashire Songs and stories, mixed in with classics and popular tunes and songs. John, along with Michael, was very popular at accordion clubs such as at Leyland Accordion Club, The Black Country Accordion Club, Bon Accord and several other accordion clubs in England. Their great mix of humour, popular numbers and entertainment, guaranteed they would be asked to make multiple return visits. John was a member of Five Penny Piece and was a favourite around folk clubs in the country. He will be sadly missed.

We don’t normally have articles related to politics in our newsletter but we thought you may enjoy/like to see a video that someone has edited together which features Donald Trump giving one of his many speeches but this time he has an accordion (well it looks more like a melodeon but we’ll go with it) in his hands, the end of the video advertises a spoof tape of accordion music that Donald Trump is releasing. If you are interested in seeing the 1 minute video visit www.radiotimes.com/news/2017-01-16/life-accordion-yes-accordion-to-donald-trump-will-make-your-day

This Wednesday is a local players concert. Please bring along yourself and if you play, then don’t forget to bring your accordion.

The doors open on Wednesday night at 7.30pm for a prompt 8pm start.  Please bring along your friends and anyone who might be interested in attending. If you see someone you don’t know then please say hello and make them welcome to the club.

Gabbanelli Castelfidardo, in very good condition & little used. Owner no longer able to play due to illness. 4 Voice, 96 Bass Full Mussette. Looking for offers around £1,000. Contact Alan on 01253 862837 or 07515394843, email alangroves@talktalk.net This accordion is located in Thornton-Cleveleys.

Phil Cunningham has appeared in a BBC Comedy Show called Scot Squad which is a spoof of documentaries that follow the Police Force in their daily job. The police officers are working on a bootlegging case in a local Scottish pub, the officers are working undercover when Phil walks into the pub with his accordion case on his back, he has a quiet word with the barmaid to offer his latest CD as a prize for the upcoming raffle. The officers do not overhear the conversion and assume he is selling dodgy gear and apprehend Phil…. We’ll let you find out what happens by watching the show, Phil’s piece in the programme begins at 8mins 35 and finishes  at 11min 45. There is plenty of accordion playing in this section of the show www.bbc.co.uk/iplayer/episode/b08bhxkl/scot-squad-series-3-episode-4

Accordion Busker loose on the Metro

Travellers on the Tyne and Wear Metro in the North East of England will have most likely seen a busker playing in the carriages, it has been reported that the busker has been aggressively demanding money from passengers. The Metro have warned the busker not to play in the carriages and that the metro do welcome buskers playing the stations if they go through the right channels. The Metro have advised passengers if they see the busker playing in carriages again to contact the police as the busker has failed to heed Metro’s warning. To read the full story visit www.chroniclelive.co.uk/news/north-east-news/metro-accordion-busker-readers-talking-12475575 Twitter has been alight with a variety of comments from commuters, ranging from how they love the entertainment on their journey to how loath the noise after finishing a long day at work.

The Hut People have added a concert at Thornton Little Theatre, The Hut People Consist of Accordionist Sam Pirt and Percussionist Gary Hammond  who both have both have extensive backgrounds in music – performing alongside acts such as The Beautiful South, Nina Simone, The Dubliners and Sharon Shannon. They will be performing a mix of global rhythms with folk tunes from Quebec to Spain, Scandinavia to Sussex and everywhere in between, their tour is a quirky celebration of their rich musical heritage. A spokesman said: “Expect feel-good dancing tunes, audience participation, step dancing, Quebecois foot-percussion (whilst playing the accordion!) and humour aplenty. “This is high-octane feel-good music from a very likeable duo who have the ability to get the whole audience involved and loving it – before the end of the first tune!”

Tickets are £10. To book, call the Wyre Theatres box office on 01253 887693 or visit www.wyretheatres.co.uk  to view The Hut people’s other tour dates visit www.thehutpeople.com

Weird Al Yankovic’s Music may not be to everyone’s taste but he has just released for Pre Order a rather interesting box set containing all 14 albums, a 100 page book of pictures and other memorabilia . All contained in a custom made box, which is a replica of Weird Al’s own accordion. The box is so unusual that the time taken to manufacture it means that it won’t be arriving on your doorstep till the end of November 2017.  There are a number of different package the most expensive is £380 and contains All 14 studio albums plus bonus album of demos and rarities remastered in 150-gram vinyl, 100-page Collector’s Book of rare photos and memorabilia, Signed test pressing – one of the original 14 studio albums, All of above housed in custom created replica of Al’s signature accordion!, Customized Zoetrope-animated turntable mat, Limited edition retro-style Weird Al pennant by Oxford Pennant, Custom Weird Al socks, Magnet sheet (8.5”x11”) – build your own Al! and a Commemorative Tee Shirt. There are 8 different pages that work their way down to £24. If you are a Weird Al fan visit www.pledgemusic.com/projects/weirdalyankovic

Our March Guest Artist is Jovan Rnjak who has not visited the club before, but who I have

seen play many times at Accordion Festivals. We have been hoping to get Jovan to club for a while now so we are thrilled that he is able to come and play for us on 15th March. Here is a little bit of history about Jovan. Jovan was born in Birmingham, England and started playing the accordion at age 7, soon after he started accordion lessons at the George Clay School Of Music in Birmingham where he stayed till he was 15 years old. As a child when Jovan was working through his grades he joined the school choir, where he sang, played the recorder and Glockenspiel. It was during this time that he started to perform at local venues.   After completing his grades, Jovan continued to study music at senior school where he learnt to play the clarinet as a second instrument. In his late teens, Jovan continued to perform all round the UK and at the age of 17 toured Canada and the USA playing with a folk dance group.   Today Jovan continues to perform at all kinds of events, playing all styles of music either as a soloist or as a member of a group of musicians.

We were sent the following TV clip by email from Paul Ramunni who reads our newsletter. The clip is taken from a programme called “Better Connecticut”. Paul Ramunni was interviewed about his accordion collection, where he shared how he came to collect accordions and how he now runs a museum called New England Accordion Museum. It is an interesting interview and can be watched on the following link www.wfsb.com/clip/13021340/prepare-to-be-amazed-by-one-mans-accordion-collection

You can also find the museum Paul runs on its website at www.newenglandaccordionmuseum.com

On the 7th August 2016 an The Piano and Accordion Shop in sunningdale was broken into. Fourty Accordions and some computer equipment was stolen. Sadly the shop has been broken into again on Friday 3rd February at around 2:40am where 5 Accordions were stolen, these were worth £20,000. There was an attempted break in on Monday 30th January at around 2:10am but the intruders were unable to get into the shop and left empty handed. Thames Valley Police believe that the break-ins are connected, they have released CCTV images of another man they believe has information related to the break-ins, they have also re-released images of a man they believe has links to the Port Talbot area of South Wales who may have information relating to these break-ins. Below the picture on the left is the newly released CCTV image, on the right is the Brandoni 78 bass mentioned below 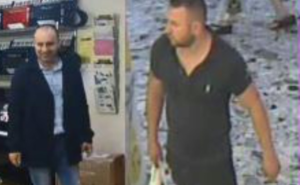 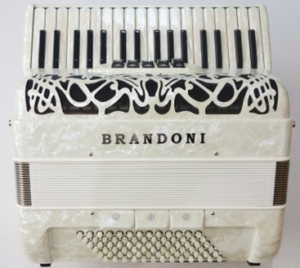 The accordions that were stolen in the latest burglary are:

Of the 5 that have been stolen, the Brandoni 78 Bass (pictured) is unusual, The Roland fr4x is a brand new model and is one of the first in the country it has been taken without the power supply. If you are offered or see these accordions advertised pleased call 101 asking for Thames Valley Police quoting Thames Valley Police quoting reference numbers 43160218225 and 43170034683.