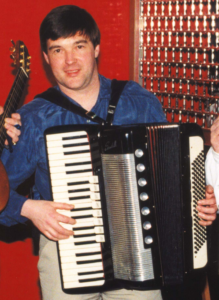 Clerk, The Minstrel, Floral Dance and The Rare Old Mountain Dew. Our next player was Patrick Halpin playing Oh Antonio, Galway Bay, Roddy McCorey, He’ll Have To Go And Come By The Hills.  Ann Parker was next on to the stage, Ann played Irish Eyes, I Belong To Glasgow, Beer Barrel Polka, Lovely Bunch Of Coconuts, Loveliest Night Of The Year, Frog Chorus and Memories Are Made Of This. It was Liz Taits turn to play, she gave us Melody Moments, Toytown Manla, Du Du Liegst Mir Im Herzen and La Marianne. It was now break time and time for catching up with everyone over coffee. After the break we started the second section of the night with  Graham Crow playing Tales Of The Unexpected, Laura’s Waltz, English Country Garden, Danny Boy, The Ash Grove, Scotland the Brave, Paper Roses, All The Nice girls Love A Sailor, I Do Like To Be Beside The Seaside, Who’s your Lady Friend and Lovely Bunch Of Coconuts. Sara Daly was our next player, she started with The Last Waltz, then continued her set with Lovely Glens Of Angus, My Heart Belongs To Daddy and Sailing Through The Narrows.  John Lennox was up next, he played Padam Padam, When You’re Good To Mama, Two Ladies, Que Sera Sera and Lili Marlene. I was up next, I played Oslo Waltz, American Patrol and Red White And Blue. Our next player was Bernard  Bamber playing Green Hills Of Antrim, Old Flames and Galway Shawl. After Bernard, we had Harvey Seager playing Sarah’s Waltz, Bridges Of Paris, Amanda’s Waltz, Tulips From Amsterdam, Daisy and, to finish, I’ll Be Your Sweet Heart. Colin Ensor was next on to the stage, he started with There I’ve Said It Again, and continued with The Town I loved So Well, Domino, The Greatest Mistake Of My Life and Ashokan Farewell. We were fast approaching the end of the night now, and time for Reuben Hickinbotham to play. Reuben played Can’t Give You anything But Love, Kiss Me Honey Honey, Michelle, Sunnyside Of the Street and Side By Side. Sara Daly finished the night with Envikens Waltz and Once Upon A December from the film Anastasia.   As usual our local players nights are great fun, its nice to hear the variety we have at the club.  Thanks go to Bob on the drums who provided accompaniment for several players during the night.

This Wednesday we have a great guest artist night lined up. Please bring yourself to support Jovan, who is coming up from Oxford to play for us. I have wanted to get Jovan at the club for a couple of years, well this Wednesday he will be there. Please bring your friends and anyone else you can, it’s a night you will be pleased you attended.  I look forward to seeing you there.     David Batty

This Wednesday is a Guest Artist concert with Jovan Rnjak(pictured right).  Jovan will be 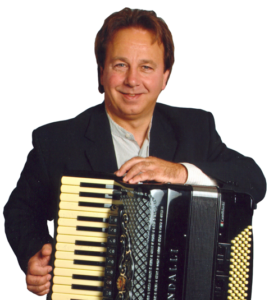 playing a wide variety of music from standards to singalong. Jovan is a very accomplished player, and one you shouldn’t miss.

The doors open on Wednesday night at 7.30pm for a prompt 8pm start.  Please bring along your friends and anyone who might be interested in attending. If you see someone you don’t know then please say hello and make them welcome to the club. David Batty

Day passes have become available  for the Accordion festival taking place in Blackpool from the 31st March – 3rd April.  The Cost is £25 per day or £50 for a weekend pass. Passes can be purchased online at www.carillonstudios.com. Below is a schedule of the weekend. If you have never visited an accordion festival before this is a great opportunity to see what it’s all about and it is on our doorstep!

This follows the first repair course organised last year and once again Paul Flannery is the tutor. Paul handles repairs for the Music Room accordion department in Cleckheaton Yorkshire. Paul is thinking of retiring or semi retiring in the near future and is happy to pass on his knowledge. He is a piano tuner who got involved with accordion repairs and tuning some years ago and initially received tuition from a Hohner technician but he is mainly self-taught. The location is The Adelaide, 57 Park Road. Teddington TW11 0AU. The Travelodge in Teddington is only a short walk away.  Peter can provide other accommodation options if required depending on budget.

Morning session 9.45am – 12.45pm Refreshments provided during the morning 12.45pm-2pm lunch break. Afternoon session 2pm – 5pm Refreshments provided during the afternoon. Today’s session will explain the working parts of the accordion and how the treble and bass switches work and common problems. Also reed block configurations, voices, how to undertake minor repairs, including valve replacement, sticky keys and switches, changing bellows gasket and general fault finding. If anyone wishes to bring along an instrument which is need of some attention to use as an example then this will be ok providing it is not requiring major work. During the course some practical work will be possible. Materials are provided. Participants should bring a note pad for their own reference notes.

Morning session 9.30am – 12.45pm Refreshments provided during the morning 12.45pm-2pm lunch break. Afternoon session
2pm – 4.30pm Refreshments provided during the afternoon
Today’s session will follow on from the previous day and will include an overview of instrument tuning. Questions can be fielded throughout the course. Approx 4.30pm Finish Coffee /tea/biscuits are included Cost for the 2 days – £98pp (based on min 10 attending)

The UK’s first ever live music census is being carried out in six cities across Britain. The project aims to take a snapshot of current trends and map out the ways the public engage with music. It is hoped the survey will help measure live music’s cultural and economic value and identify future challenges and opportunities. The 24-hour survey began at noon on Thursday 9th March 2017 in Glasgow, Newcastle, Oxford, Leeds, Southampton and Brighton.

It has been commissioned by UK Music, the campaigning and lobbying group that represents the recorded and live music industry, and is being led by the universities of Edinburgh, Glasgow and Newcastle.

Prof Martin Cloonan, professor of popular music politics at Glasgow University, said: “What is being proposed has never been done before and is set to reveal the true state of the UK’s live music industry. “Live music is a vital cultural and economic asset and it is important to monitor its health and to support it. “The results will help to provide the clearest picture of the Glasgow live music scene yet, illustrating that vibrancy while also show issues which need to be addressed.”

According to UK Music, the music industry is worth an estimated £4.1bn to the UK economy and creates almost 119,000 jobs. The group said that despite the value of live music to the economy, the full picture of what the public is listening to and how they listen and interact has never been fully and accurately surveyed.

Dr Matt Brennan, from Edinburgh University, is leading the UK Census project. He said: “Venues around the country have been telling us that they already operate on thin margins, so proposed increases in rateable values of up to 55% in some cases will have a significant impact. “The UK Live Music Census will be very important in identifying challenges that the industry faces, such as rising rates and other issues. “It will give us a detailed picture of what exactly it means to be a venue owner, a musician, and a live music lover in 2017. Our hope is that the census will be a vital tool in strengthening a much-loved part of the UK’s culture.”

The census aims to cover 70 music events in Glasgow alone. Hundreds more will be covered at the five other cities in England.

The survey team will also talk to audiences, venue staff and musicians.

Its findings will be supplemented by a nationwide online survey for musicians, venues, promoters and audiences that will be open until 8 May. The survey can be accessed on www.uklivemusiccensus.org and there is a chance to win an IPad mini 2. They are looking to hear from Audience members, Musicians, Venues and Promoters.  We hope that some of you will fill in the survey and mention Leyland Accordion Club to give a varied view of the UK live music scene and to show how popular the Accordion is in the UK.  The survey can be filled in at www.uklivemusiccensus.org

Two of Scotland’s most loved traditional musicians are Aly, a stunning traditional style fiddler, and Phil, one of Scotland’s 25 most influential people & a dazzling accordion player. They are now celebrating 30 years of playing together, when this pair perform live the result is stunning. The Concert is on 24th March 2017 at The Platform, Old Station Building, Central Promenade, Morecambe, Lancashire, LA4 4DB. Tickets cost £15 and can be purchased by tel:01524 582803 or online at https://uk.patronbase.com/_ThePlatform/Productions/BAIN/Performances

Abide With Me Origins

David’s interest in finding a good version of Abide With Me, and playing it in the key it was written in, led to an interesting discovery. Most of you will have heard or know Abide With Me, but possibly not many will know the history of it. Abide With Me started life as a poem in 1847 written by Scottish Anglican Henry Francis Lyte. Henry set the poem to music while he lay dying of tuberculosis, he survived  for three weeks after it’s completion.  Although Henry Lyte composed music for the poem it is most often sung to the tune of “Eventide” composed by Englishman William Henry Monk in 1861. There are other tunes that are sometimes used to sing Abide with me such as “Morecambe” by Frederick C. Atkinson 1870,  “Penitentia” by Edward Dearle  1874 and “Woodlands” by Walter Greatorex 1916.  So now you know that if the words of Abide With Me are not sung you are most likely listening to “Eventide” by William Monk.