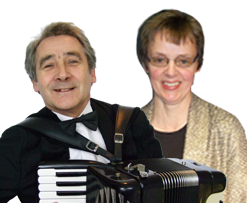 Our September Concert, although a guest artist night, started as usual with our own local players. The first player on the stage was Arthur Frankland playing Fields Of Athenry and Danny Boy. Next to take the stage was Sara Daly playing Please Don’t Talk About Me When I’m Gone and Josephine’s Waltz. After Sarah had played we heard Hilda McCann playing South Of The Border and Alexander’s Rag Time Band. Our next player was Helen Rich who had come along to play with Walter, she started with  Trieste Overture, Pigalle (a Frank Marocco Arrangement), Brahms Hungarian Dance No.4 (G. Romani) Valse Angelique and Sharshooters March (an Arrangement by G.Deiro). Helen then finished her first spot with MyFanwy, and Granada Mia (Crossman). It was time for Walter Perrie to play, Walter started with his Excelsior Musette Accordion for the first tunes. The first piece of the night from Walter was Blue Bells Of Scotland, this was followed by Tobermoray Wedding and Maries Wedding. Walter then played a selection of Waltzes including  Westering Home, Northern Lights Of Old Aberdeen and My Ain Folk. Walter then switched to his Straight Tuned Bugari, which was originally a five voice accordion which Walter had converted to a four voice and retuned. Walter started on the Bugari playing Return to Sorrento, then went on to a crowd favourite Figaro’s Aria. Walter continued his set with Brahams Hungarian Dance No 5, Fleur De Paris, La Vie – En – Rose, Autumn Leaves, You’re Breaking My Heart, Throw Open Wide your Window and to finish he played a March. After the break Colin Ensor was our next player, he played Down Forget Me Not Lane, Ashokan Farewell and There I’ve Said It Again. Our next player was Rebecca playing Moon River and Home On The Range followed by a Duet with David (ME) of Plaisir D’Amour. I then stayed on the stage and played American Patrol while our next player got ready. I was followed by Helen Rich in her second spot of the night playing Kingsbury March, Serinite D’Esprit. Annette, Toby, Valerinana, Pyramid (P.Deiro)  and to finish her second set, Olive Blossom. To finish the night Walter Perrie returned to the stage and started with a Scottish selection including Scottish Soldier and Gallic Waltzes. Walter then played three Ukranian Numbers, followed by Shostakovic Jazz Waltz No 2, Figaro’s Aria, Under Paris Skies  Duet With Helen and finally Dantesque. This was a great night of entertainment from Walter, Helen and all our local players, you missed out if you missed it.

Chester Accordion Club’s next meeting is on Tuesday 25th October  at The Groves Club, Chester Road (A5032), Whitby, Ellesmere Port, Cheshire. Telephone Lynn McCallum on 0151 339 9850. Sue Coppard is the Guest Artist at their November Meeting.

The February Eastbourne Accordion Festival is taking place on the 10th – 13th February 2017. The Artists appearing are: Duo Paris Moscow (Roman Jbanov & Domi Emorine), Gary Blair, Sammie Catling, Harry Hussey and John Romero. A full itinerary of what is happening over this weekend can be found on Carrillon Studio’s website at www.carillonstudios.com The weekend costs £225 Per Person For more information and to book call 01606 270148.

This years Leyland Christmas Lights switch on will be on the 26th November. Their 2017 Leyland Then & Now Calendar is on sale at the following places Hallmark, Market Ale House, Market, Poppy’s, The Plaice, Atkinsons Jewellers, Peppermint Cottage, Heaven On Earth, Post Office (Hough Lane), Open Office Solutions, Grandad Jims, The Gables, RBS Bank, No77 Creative Hair and Lucy’s Tea Time Treats All monies raised from the sale of the calendars goes towards Leyland’s Christmas Lights.

This Wednesday is a Local Players concert featuring our own local talent. The local players nights are a  chance for us non-professionals to enjoy playing on the stage in a supportive atmosphere. If you don’t play then please come along a be an audience, if you do play then please bring your accordion and give us a tune or two. Please try to support this event  The doors open on Wednesday night at 7.30pm for a prompt 8pm start.  Please bring along your friends and anyone who might be interested in attending. If you see someone you don’t know then please say hello and make them welcome to the club.

Will Pound and Eddy Jay on Radio Lancashire

Myself and Rebecca attended the recording of Will Pound and Eddy Jay on The Drift at Radio Lancashire. The Programme was aired on Radio Lancashire on the 10th October but it was recorded on the 3rd October. The Drift is a Folk music programme presented by Phil Brown. It was very interesting to see how they record a radio show and put it together.  The room was filled with around 80 people quite a few of these had to stand as they had run out of chairs. Being first in the queue we got a front row seat as you can see from the above photograph. You can listen to the show at http://www.bbc.co.uk/programmes/p0491wfw   The BBC often give away tickets for shows on the TV and the Radio, you can find out which shows are giving away tickets by visiting www.bbc.co.uk/showsandtours/

The 31st March – 3rd April 2017 sees an Accordion Festival take place in Blackpool at The Carousel Hotel. The Guest Artists so far for the weekend are: Oleg Sharov, Anastasiia Sharov, Tom Hardaker, Harry Hussey & John Romero.  The Trade stands attending are: The Accordion Shop, Acorn Accordions, Birmingham Accordion Centre, Harry Kipling’s “Accordion Treasures” and Carillon Music. The cost of the festival is £225 Per Person this includes Bed, Breakfast, Dinner and the weekend entertainment/classes. For More  information and to book contact Carillon Studios  on 01606 270148

Liverpool Irish Festival is on from the 13th October—23rd October with a programme of culture, performance, film, music and talks. Commemorating a centenary since the Easter Rising. Music comes in the form of fiery live performances and great singer songwriters. Damien Dempsey, from Dublin’s North Side, offers a one off chance to see him perform his unique album, No Force on Earth, commemorating the Easter Rising of 1916. “Psycho ceílí” comes from The Logues (County Tyrone) and their “whiskey soaked folk” with electric live performance, contrasting the fiery and exciting Rackhouse Pilfer who bring their blend of rootsy Americana and folk. This Dublin four-piece perform using a wide range of instruments, including uilleann pipes, concertina, Russian accordion, fiddle and guitar. After their storming performance in 2014, We Banjo 3 return with their modern take on Irish old-time bluegrass. There are around 60 events at 24 different venues across Liverpool. To see a list of events and for more information visit their website at  www.liverpoolirishfestival.com

An auction of Jimmy Shand memorabilia of more than 60 Items raised over £7,000.  The 13 Melodeons in the auction sold for more than £3,000. The Red Book and script from “This is your life” sold for £700. A locomotive name plate engraved with his name sold for £1,100. Two Gold Discs also sold for £260 each. The Auction attracted interest from collectors and Scottish traditional music fans from around the world.

There is an organised trip to Castlefidardo by Peter Le Geyt, this is from 16th – 20 May 2017. Below is the itinerary for the trip.

Day 1 – Tuesday 16 May Depart London Heathrow 08.35 by British Airways. Arrive Bologna 11.40 am, Private luxury coach travel to Castelfidardo (Around 1.45 – 2hrs) with lunch stop on the way. On arrival at Castelfidardo check in to rooms at Hotel Parco (4*)

Time afterwards for those interested to visit the Accordion Museum and to call in at the local music shop opposite the monument to the Paolo Soprani factory. Dinner – Own arrangements at hotel or local restaurant – dining options provided.

Note: We will have our own coach and driver for the whole period plus a few accordions to keep with us for the group to play during our stay – kindly loaned by accordion manufacturers.

Day 2 – Wednesday 17 May Approx. 9.30am – We visit Victoria Accordions showroom in the town centre to see the worlds’ largest working piano accordion and now a huge chromatic model. Opportunity for those who wish to visit the museum again.

Lunch – Own arrangements either In the town or back at the hotel.

After lunch there is factory visit to a major manufacturer such as Beltuna, Pigini or Dino Baffetti. Details to be advised nearer the time. Return to hotel late afternoon. Approx: 7.30pm Depart for dinner at the seaside resort of Sirolo at a restaurant overlooking the Adriatic. (Dinner including drinks – Euro €25). Group members can play during and after dinner on the loaned accordions we will have with us. There are other restaurants available nearby if people prefer to dine separately.

Day 3 – Thursday 18 May Free Day – For those interested there are optional visits to smaller factories within walking distance including Alessandrini, Vignoni, and Giustozzi plus opportunity to visit Binci Reeds, Antonelli Reeds and Galassi Bellows factory. Music-Tech showroom is at the rear of the Hotel Parco so convenient for those who want to try their digital and midi instruments. Opposite the hotel in the park gardens is the impressive monument to the historic Battle of Castelfidardo. Lunch – Own arrangements either in Castelfidardo or by coach to a nearby town returning mid-afternoon.  Dinner – Own arrangements at the hotel or local restaurant or by coach to a nearby town for dinner.

Day 4 – Friday 19 May Visit to ZeroSette / Bugari factory Lunch – After the factory visit travel to the nearby attractive religious pilgrimage town of Loreto for lunch. Return to hotel by mid-afternoon stopping to drop off anyone wishing to visit the Carini accordion accessory shop. Coach will return for pick up from Carini after dropping off the rest of the group at the hotel. Dinner (included) – Private group dinner at a nearby venue with a brilliant local guest accordionist and also opportunity for group members to provide entertainment on the loaned accordions.

Day 5 – Saturday 20 May Depart for Principality of San Marino at 9 am First stop is at the huge Marino Baldacci music showroom located in a shopping mall. There is time to look round and try some of the digital and acoustic accordions on display or for some shopping before continuing on to the centre for lunch and to enjoy the wonderful views from San Marino. Depart mid-afternoon for Bologna airport.

If you are interested in being part of this trip Prices start from £569 The proposed itinerary includes flights, hotel accommodation, coach transport throughout, factory visits, entrance fees, places of interest, group dinner with entertainment and accordions to play during the stay. Fully escorted. Contact Peter Le Geyt on 020 8977 6680 or email: plg@plgmarketing.com

As part of their traditional Spirit of Christmas concerts the Liverpool Philharmonic are putting on a concert with accordionist Ksenija Sidorova this will be an evening of mesmerising music. Full of passion, fiercely energetic and compelling to watch, wait ‘til you hear her play! The versatility of this instrument will be evident in a programme of music that Ksenija loves the most, including works from Mozart as well as some less known composers who have written for the instrument including Kusiakov, Voitenko and Schnittke. The concert takes place on the 19th December 2016, Tickets cost £15 and are available from www.liverpoolphil.com or call 0151 709 3789