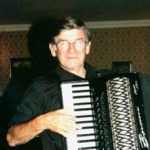 We didn’t have an August concert, instead we changed I in to a practice night. This was because myself and Rebecca were away and it was easier to run it as a practice night instead of trying to arrange someone to set up the amplifier, speakers and run the night. BUT instead of an August concert, those who attended our Practice Night on the 7th September were treated to a night with Harry Hussey, who visited while he was in the area. Harry was playing from before 8pm through to after 11pm. I have good reports that it was an excellent night and a treat for those people attending the practice night not knowing that Harry was going to be there, or that he was going to be playing.

I believe harry was playing requests, giving advice to some of the players and generally enjoying himself throughout the night. Colin said that the playing carried on right through to throwing out time. I wish I had been there to listen to it.

Our concerts start again this week with walter Perrie (see story on the next page). I hope you can attend to support this night.

The rest of our dates are on the inside back cover of this newsletter, please let anyone know about the club who might be interested in coming along to hear our players or our guest artists, or anyone who is looking for a social night out.  There must be hundreds of people in the local area who would love to attend if only they knew about us.

This week we have the welcome return to the club of Walter Perrie. Walter is well known at the club for his lively renditions of Scottish, French , continental, classical and various other styles of music.

Please try to support Walter on Wednesday night if you can. It will be nice to see him back at the club, its been quite a while since we heard him play.  If you have family or friends that may be interested then please bring them along for what promises to be a great night of entertainment.

Blackpool is once again hosting the fireworks championships. These are held on the sea front each Friday, the event starts at 7.30 with the fireworks being lit at 8.30. Some of the Fridays have already passed but there are two left…

If you can make this event then you can watch the fireworks then walk through part of the lights, or return to your car to drive through them.

This Wednesday is a guest artist concert The first one after our summer break. The concert features a night with Walter Perrie.  It is always good to see Walter at the club with his wide range of music and his lighthearted perfomrmances. Please try to support this event  The doors open on Wednesday night at 7.30pm for a prompt 8pm start.  Please bring along your friends and anyone who might be interested in attending. If you see someone you don’t know then please say hello and make them welcome to the club.

Adrienne Griffiths sadly passed away in her sleep on the 5th September while attending the Folk Week at St Audries Bay. Adrienne was a very active member of the UK accordion scene, especially in the festival scene where she was often running workshops or orchestras. Her  funeral is being held on the 20th September in Southampton. Our thoughts are with her Family and Friends at this sad time.

A While ago we wrote about the BBC putting together a Virtual Orchestra and they were calling for all Musicians to get involved  the closing date for entries was the 27th August with the compilation of entries being broadcast on the 10th September as part of the Last Night of The Proms. Over 1,200 people took part playing 50 different instruments, the Accordion had a bit of  a solo at the start of the video. We spotted 6 – 7 Melodeons, Accordions and Concertinas through out the performance. To watch the performance of the Toreador Song visit http://bbc.in/2cNfyaD If after watching this you fancy having a go at playing the Toreador Song they still have the sheet music on the website at www.bbc.co.uk/programmes/p03m1dpm

Folkus are holding their annual Music Making Weekend on the 10th – 12th February 2017 at Waddow Hall, Clitheroe. Over the weekend there be opportunities to get tutition on Piano Accordion, Fiddle, Bodhran, Guitar, Mandolin, Melodeon, Voice, Hurgy Gurdy & Mountain Dulcimer, Ukulele, Song Writing and Musical Tech Tips. The Tutors for the weekend are: Chris Coe, Richard Moss, Dave Howard, Robin Shepherd, Grace Smith, Callum Younger, Kieran Szifris, Derek Gifford, Joanne Singleton, Sian Philips, Rusty Wright and Alan Bell. The Prices for the weekend vary depending on if you are visiting for the day or need accommodation. For a list of prices and more information visit www.folkus.co.uk/waddow 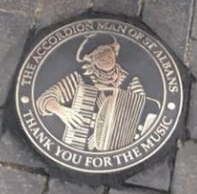 Paddy Delaney, an accordionist who busked at St Albans market for more than 30 years, died last year. Following his death a petition was set up to install a plaque in his memory close to where he busked on Upper Dagnall Street, St Albans. It received more than 1,000 signatures and a charity busking day last year raising £1700 to fund the plaque, which was installed on the 3rd September. St Albans Mayor, Cllr Frances Leonard, officially unveiled the plaque She said: “One of the roles of a Mayor is to champion the city we live in, local charities, and events. The Plaque for Paddy campaign represents all of those things in bucket loads.

“I’m thrilled to officially unveil the plaque in honour of Paddy Delaney and the contribution he made to our city through music.”

A Night of Parisian Fantasy

The Accordion Shop in Sunningdale Berkshire had 40 Accordions stolen along with computers and accessories from the shop. It is thought that the break in was carried out by an organised gang as they knew which instruments they wanted, taking mainly Italian accordions of high quality from makers such as Cooperativa, Excelsior, Paolo Soprani, Scandalli. Etc. A full list of all the Accordions stolen can be found on their website at www.theaccordionshop.co.uk/news/stolen-accordions If you are offered any of the accordions listed, or are suspicious of any adverts you may see online etc. Contact the Sunningdale shop on 01344 873717

Leonard Brown has produced a CD as a tribute to Tom Alexander entitled “Tom Alexander The Great” accordionist Leonard Brown performs some of Tom Alexander’s favourite concert pieces played in the style and sound of Tom Alexander. The Track list for the CD is: The Flying Scotsman, Isle of My Heart, Lady of Spain/El Relicario, Shetland Reels, The Oslo Waltz, Happy Hours, The March Hare/Irish Washerwoman, The Dark Island, The Typewriter, Le Manege, The Oil Rigger, Spanish Gypsy Dance/Viva Espana, The Jacqu1eline Waltz, Under the Double Eagle, Tom’s Medley, Sands of Kuwait, Alpine Express, The Jiggin’ Pig, Highland Cathedral, Savoy American Medley. The CD costs £11.95 and can be purchased from www.leonardbrownaccordion.co.uk/shop.html

How Do They Do It?

How do they craft an accordion? How do they make the wasabi that puts the kick in Japan’s raw fish? And how can they produce a duck call that can trick birds? S8, Ep9 airs on Wed 21 September 1:30pm on the Discovery Science Channel Sky:525  Virgin Media:259

The Sir Jimmy Shand collection, which includes over 60 historical items and paints a fascinating picture of the famous accordion player’s life, is expected to fetch more than £7,000 at the McTear’s Works of Art Sale in Glasgow on Friday 16th September. Among the items going under the hammer are Sir Jimmy’s collection of 13 antique melodeons, the big red book and script from the musician’s 1978 appearance on This is Your Life, several gold discs celebrating his remarkable recording career, diaries, kilts and sporrans, record label contracts, photographs and even a Canadian Stetson made specially for Sir Jimmy. Although the melodeon collection will  be one of the highlights of the auction, the most valuable lot is reserved for an alloy diesel nameplate, engraved with Sir Jimmy’s name. The plate, which featured on locomotive 37188 until 1996, could fetch up to £2,000. The collection is being sold by the late musician’s son Jimmy, who feels the time is right to share some of his father’s memories with other fans of Scottish music. “Although I have kept many very personal items associated with my father, I felt that there are lots of fans out there who would get enjoyment from these important pieces of Scottish traditional music memorabilia,” said Jimmy. “There are clearly some high profile pieces in the collection but there are also a significant number of smaller, affordable items that have fascinating stories attached.” To see the items that are up for Auction visit www.mctears.co.uk/auctions and select the 16th September auction.

We have made a big change to  Leyland Accordion Club website this month. It had not changed its design since I started it back in 1997, so this month we had a complete redesign so that it is easier to navigate   we are still working on adding the back catalogue of newsletters and other bits of information. In the next few months we will have moved over all the newsletters and information that were on the original website.  The new website is tidier than the old one and should make it easier for people to find out dates etc.  You can visit the site at www.accordionclub.co.uk