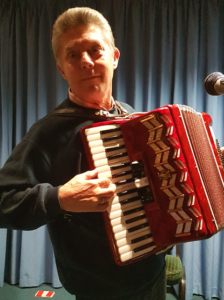 Peggy Gordon, Cliffs of Dooneen, Wild Rover, Spancil Hill, He’ll Have To Go and Oh Susanna. Up next was John Lennox playing Two Ladies, Don’t Cry For Me Argentina, Food Glorious Food, Cabaret and When You’re Good to Mama. Rebecca then made her way to the stage and started with Home On The Range, then continued with My Bonnie, Largo, Bianca Cappana and finally, Moon River. Our next player was Harvey Segar who played Return To Me, Maggie, Dye Ken John Peel and, to take us up to the break, he played Happy Wanderer. During the break we had the usual great chat and socialising that people look forward to. After the break we started the second spot with  John Robinson playing Manchester Rambler, I Feel Fine, Calico Printers Clerk, This Old House and, for his final piece, Floral Dance. Next to take to the stage was David Rigby. David started with Loveliest Night Of The Year, then went on to play On Top of Old Smoky, Que Sera Sera, The Spinning Wheel, Highland Cathedral and finally he finished with Beautiful Dreamer. It was time for Ann Parker to play, she gave us renditions of Yodelling Polka, Frog Chorus, a piece she composed herself, then to finish she played Beautiful Days. Gordon Priestly was up next playing Mariejenna Gabriella, Style Musette, Sharpshooters March, Waltz D’Amelie and La Noyee. It was now almost 11pm so I finished with night with Now Is the Hour.  Thanks to all the players we had a great night of entertainment and also thanks to all those who come along to be the audience. David Batty

As usual next month (December) will be our Christmas Party, please practice your party pieces for December.  Remember, at the December night members bring along their other skills apart from accordion playing. In the past we have had bagpipes, keyboards, guitars, monologues, midi kits etc. December will also be when we have a Jacobs Join so please plan to bring not only yourself, but also some food such as a few sandwiches, meat pies, sausage rolls or things on sticks to add to our Jacobs Join. December is our informal let your hair down night (for those that still have some).

Chester Accordion Club’s next meeting is on Tuesday 29th November with Sue Coppard as their guest artist  at The Groves Club, Chester Road (A5032), Whitby, Ellesmere Port, Cheshire. Telephone Barry Graham on 01978  760065 . Chester Accordion Club are also having a Christmas meal on Tuesday 6th December with Entertainment from Harry Hussey, The price of the Christmas meal is £25 for a three course meal or £20 for a two course meal. To book contact Geoff Lloyd on 0l244 342160.

Discover what it takes to manufacture accordions, pineapples and artificial joints. 15th Nov 12:00am on Discovery Science Sky Channel 525 or Virgin Media Channel 259.

This Wednesday is a Local Players concert featuring our own local talent. The local players nights are a  chance for us non-professionals to enjoy playing on the stage in a supportive atmosphere. If you don’t play then please come along a be an audience, if you do play then please bring your accordion and give us a tune or two. I am hoping we have a player or two making their debut on Wednesday? Please try to support this event  The doors open on Wednesday night at 7.30pm for a prompt 8pm start.  Please bring along your friends and anyone who might be interested in attending. If you see someone you don’t know then please say hello and make them welcome to the club.  This is the last normal concert night before our Christmas Party. Hopefully you can support  the club and make it. David Batty

Tommy Joyce  sadly passed away on the 1st November 2016, Tommy was well known for being the UK bookings agent for Seamus Shannon, Fintan Stanley and Dermot O’Brien. When we had Fintan Stanley play for us at the club in 2000 Tommy took to the stage and played his Bodhran with Fintan. Tommy is the father of Michael Joyce the accordionist in The Lancashire Fettlers.  Tommy’s funeral is taking place at St Richards Church, Atherton on Friday 18th November at midday followed by Burial at Howebridge Cemetery, Family Flowers only. Donations can be made in memory of Tommy to The Royal Bolton Hospital and Manchester Irish Community Care.

Thames Valley Police have released CCTV images of a man they believe may have information about the Accordion Thefts at The Accordion Shop in Berkshire. The police believe he may have connections to the Port Talbot area of South Wales. Bev Lovell the owner of the shop was interviewed on Sky News, You can watch the  sky news video on the following link   http://news.sky.com/video/appeal-after-accordions-worth-163130k-stolen-10639125 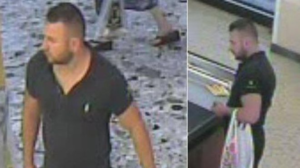 A 63 Year old man beat a friend to death with a crowbar for saying that he played the accordion badly. He is alleged to have finished of his 66 year old victim by striking him on the head with a sledgehammer before dismembering the body and disposing of parts of it in rubbish bins. The attack took place in a village near the Russian city of Cheboksaray, 350 miles east of Moscow, after the two men had been drinking. State investigators said that after killing his friend the accused man took some valerian, a herbal sleeping aid and lay down for a nap. His victim’s body was said to have lain for three days in the apartment before the killer decided to chop it up with an axe. The investigators said that he used his accordion case and a bag to carry the body parts to rubbish bins. “Some of the body parts remained in the apartment because, according to the suspect, he became tired of carrying them out” the investigators said. Body parts were found in the containers and at a rubbish dump on October 28th. Police tracked down the suspect to a friend’s house where he “actively resisted arrest for several hours, defending himself with a pitchfork”. Police found a bloodied shirt belonging to the suspect and the victim’s mobile phone hidden in a hayloft. The murder weapons were also seized. Investigators said that the suspect had  admitted to the murder.  Luckily we don’t have such critical members at the club or such violent players!

Foster and Allen are on tour in the UK, the following dates are the local venues where they are performing. To see a list of all the venues from their tour visit www.fosterandallen.ie

The 4th Midland Accordion festival  took place on the 4th – 6th November 2016 at Dudley, Birmingham.  A good time was had by all with a variety of different styles of playing by the artists and the orchestras.  The hotel was fully booked for this festival. The dates for the next festival are Friday the 3rd to Sunday the 5th of November 2017. 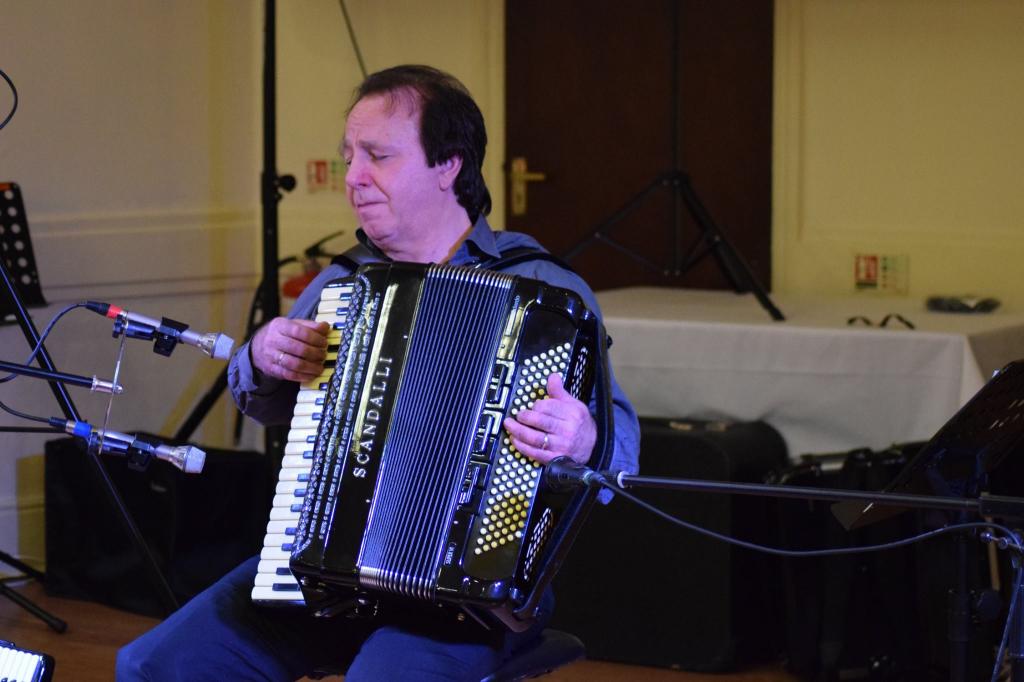 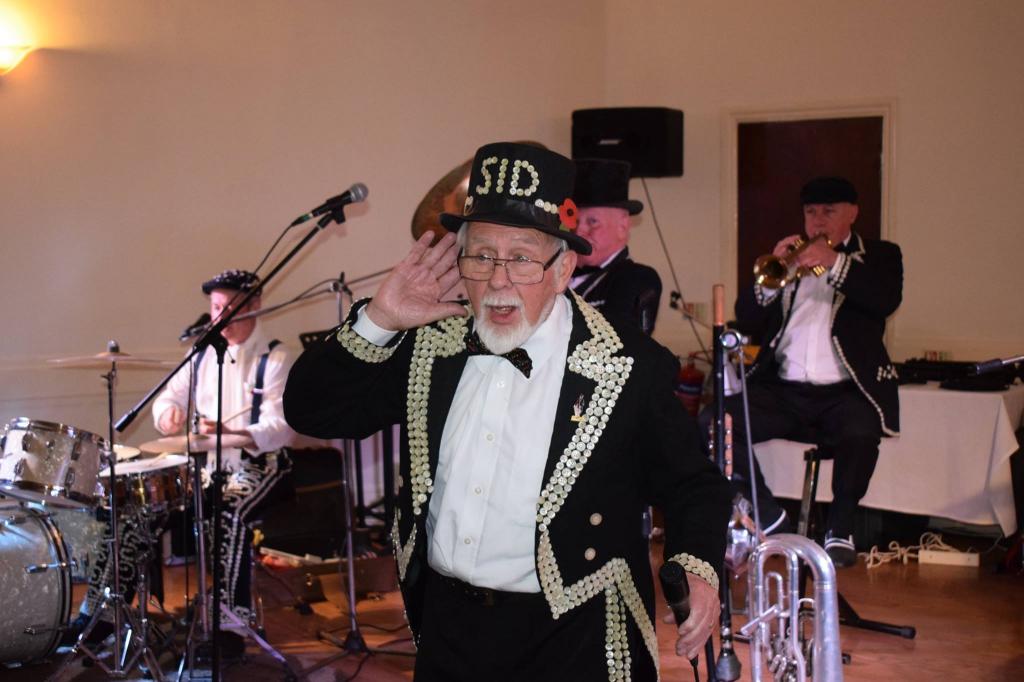 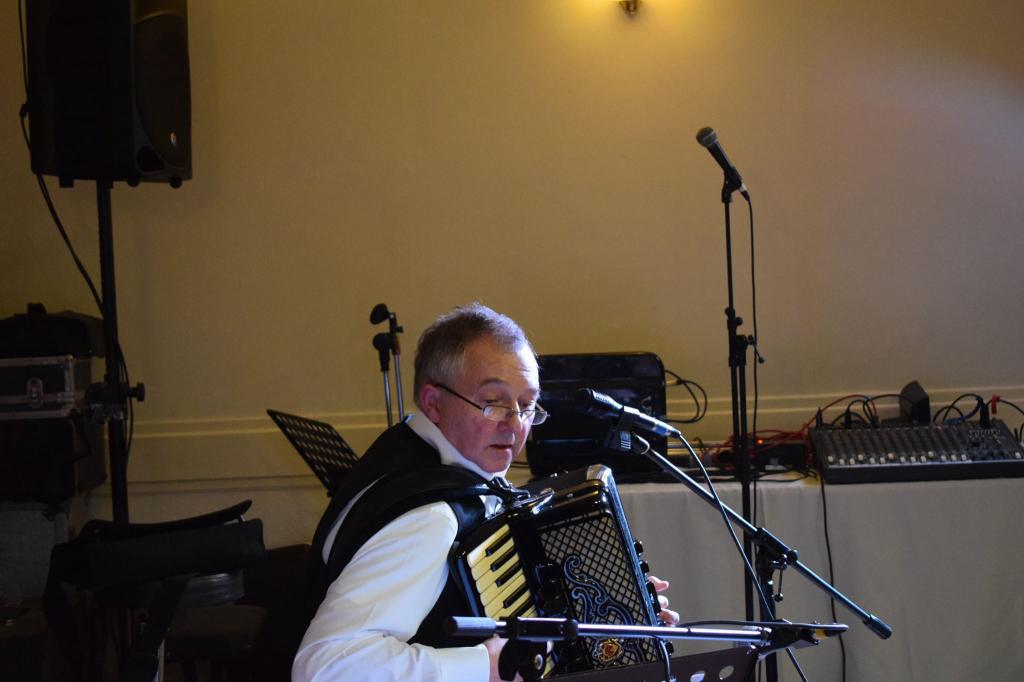 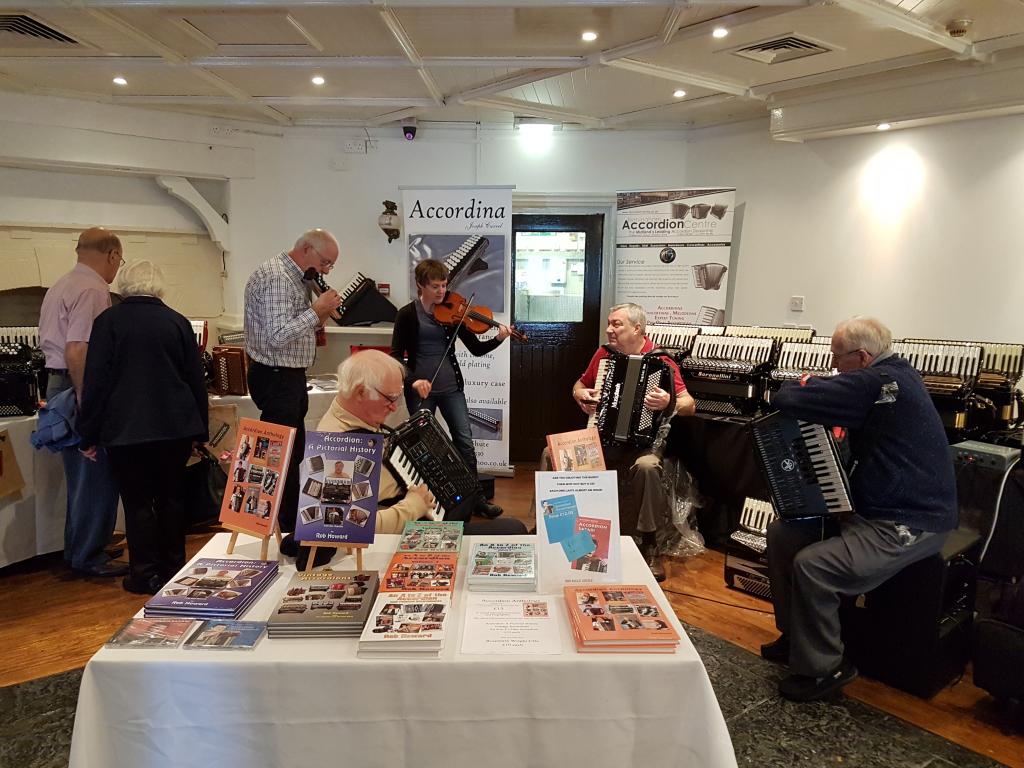 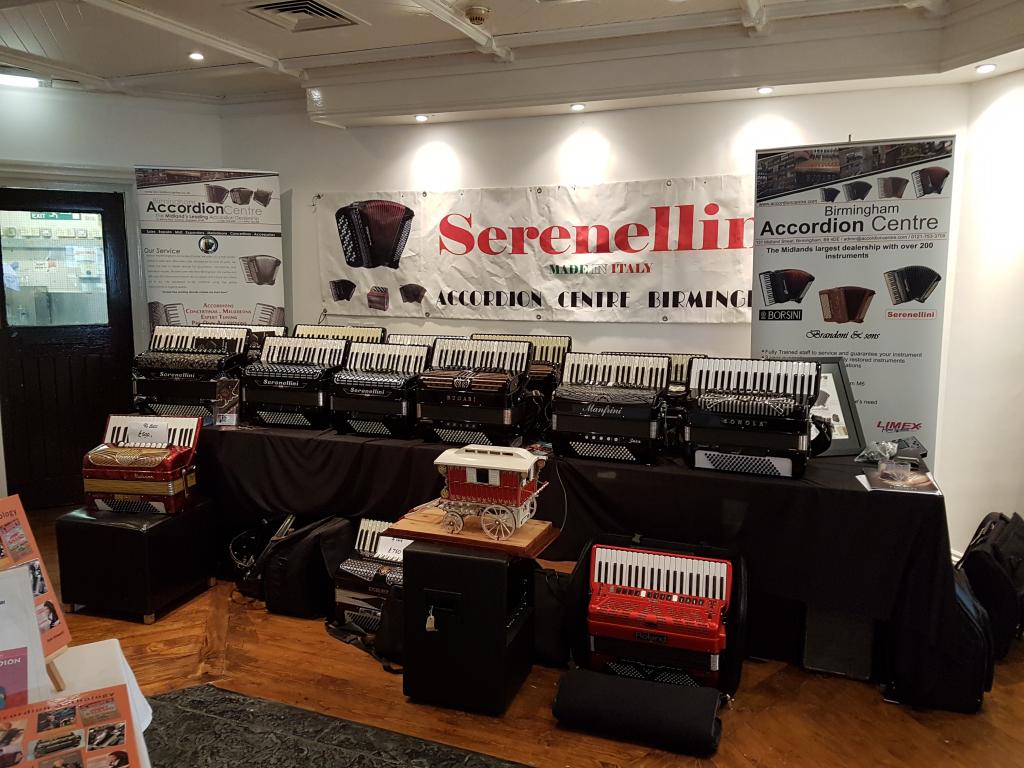 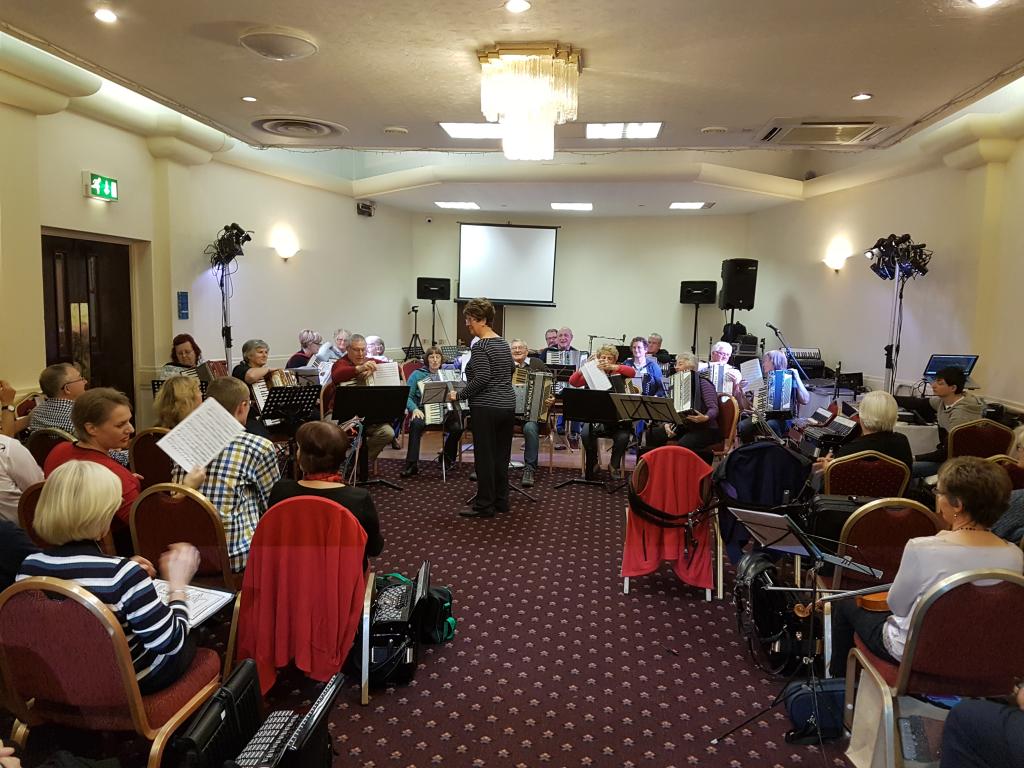 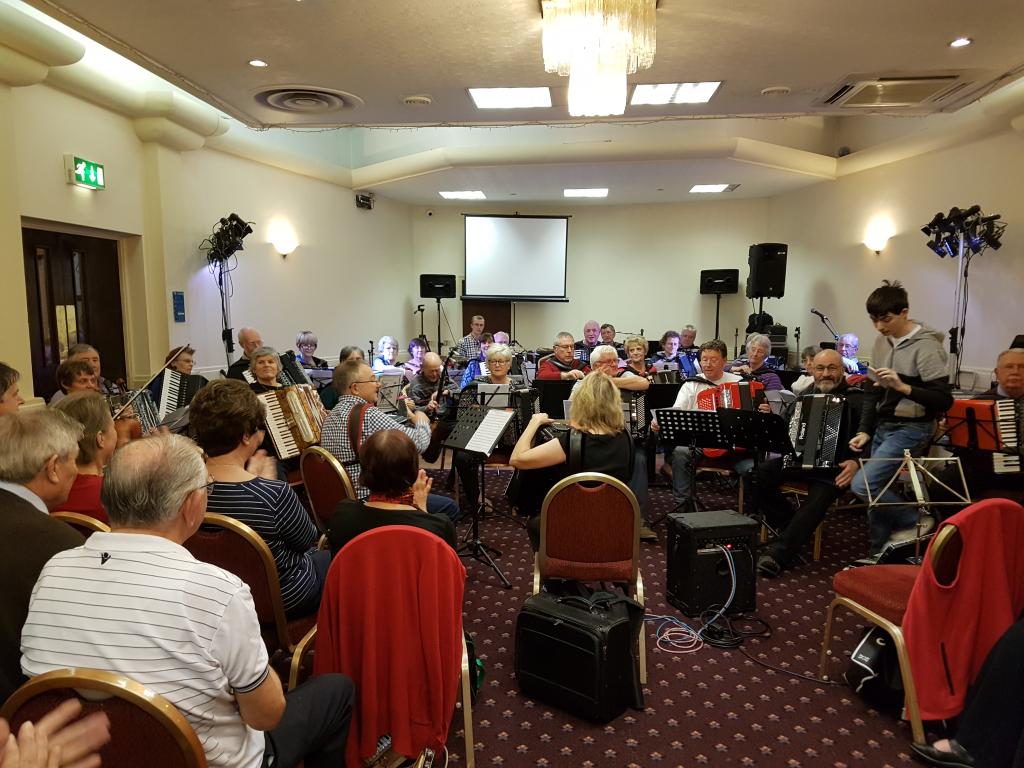 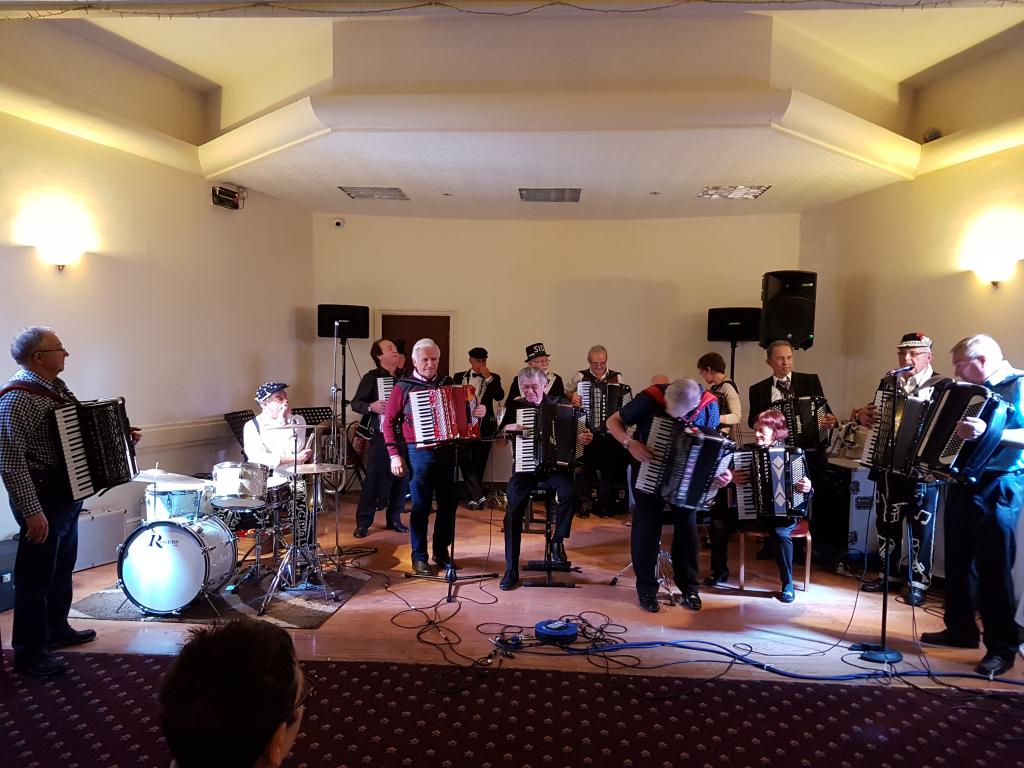