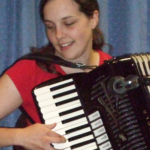 Our  May concert started with Gordon Priestley playing Weasel’s Revenge, Poste Cardiale, Style Musette, La Noyee and Vienna Forever. Rebecca then played Snow Waltz, Bianca Cappana and My Wild Irish Rose. Next we had a Justin Graham who had travelled over from Halifax to visit the club, Justin played a Selection of jigs Reels, Strathspeys and his own composition called Broken Fingers, Justin composed the tune while recovering from breaking his fingers in an accident, we hope to see Justin at the club again. After the break we started the second section of the night with John Lennox playing Those Were The Days, The Green Grass Of Home, Delilah and O Sole Mio. Colin Ensor then took to the stage and gave us renditions of That Lovely Weekend, The Greatest Mistake Of My life,  The Maigret Theme, Sweetheart Of All My Dreams and Who’s Taking You Home Tonight. Our next player was Sara Daly playing Josephine’s Waltz, Please Don’t Talk About Me When I’m Gone, Westering Home, Let Him Go Let Him Tarry and Emma and Jamie’s Wedding. Bill Agnew was our next player, he started with  Drifting and Dreaming, then went on to play Cuckoo Waltz, That Why The Lady Is a Tramp, Bye Bye Blues, Ain’t Misbehaving, Anything Goes, Bridges of Paris, Cruising Down The River, In My Mother’s Eyes, You Made Me Love You, Swannee, Dixie, Marching Through Dixie, What Do you Want To Make Those Eyes At Me For?, Please Release Me, Show Me The Way To Go Home, Goodnight Sweetheart and Oh Susannah. Reuben Hickinbotham then played What a Wonderful World, Cavatina, Moonlight Serenade, That’s Why the Lady Is a Tramp, My Blue Heaven and You only Live Twice. I had brought My Midi Systems along and played a few tunes and demonstrations of how midi works to end the evening. David Batty

All of the above events are held at the Museum on King Street, Leyland, PR25 2LE. Outdoor events are generally Free, If you wish to have a look round the Museum there is an admission charge for the museum. For more information Tel: 01772 451011 or visit www.britishcommercialvehiclemuseum.com

The doors open on Wednesday night at 7.30pm for a prompt 8pm start. Arriving earlier than 8pm gives you time for a chat.  If you see someone you don’t know then please say hello and make them welcome at the club.

If you know anyone who would enjoy coming along to our concert nights then please bring them along.

If you have not been at the club for a while, please bring yourself along, its quite good 🙂

See you on Wednesday.
David Batty

December 2015 saw a new accordion museum open it’s doors in Tacheng City, Tacheng prefecture, which shares a border with Kazakhstan. In Tacheng the accordion is akin to a symbol of the city, out of every 10 people there will be two or three who can play the accordion. The Tacheng Accordion Museum, is the only one of its kind in the country. So far, the collection includes 330 accordions from 10 countries, such as China, Russia, Germany, Italy and Ukraine, with the oldest accordion being 103 years old. The museum was set up by Dawran Dosanhan with the support of local government. He started setting up the museum in 2014 after spending six years collecting accordions from around the world. Dawran is an accordion enthusiast who fell in love with the instrument at the age of 9 years old when he was taking part in a wedding at a neighbor’s home, and a guest began to play the accordion. Suddenly he was attracted by the beautiful music and couldn’t help touching the instrument during the break. Excitement filled him and he wanted to have his own accordion. His family were not very rich, two years later his father bought him an accordion. At first, Dawran taught himself by listening to music from the loudspeaker at school and from TV, and then he was admitted by a music class at Tacheng Normal School and began a systematic study of the accordion. The six years’ experience of collecting accordions have not been plain sailing. In 2014, when he was collecting accordions in Kazakhstan, he met a 92-year-old Russian who had 22 accordions made in Germany during the Second World War. He wanted to purchase these accordions but the man refused. When Dawran explained that he wanted to open a museum in China’s Tacheng prefecture  to showcase accordions from each period in history, to help people learn more about the instruments, the man happily agreed. As Dawran removed these accordions, the man couldn’t help shedding tears while touching the instruments affectionately, as if he was saying goodbye to his children, this touched Dawran, and every time he stands in the exhibition hall of the museum, he can’t help but recalling these memories and feels a responsibility to share and spread the accordion culture.

Vitaly got through to the Live Semi Finals on Britain’s Got Talent… he appeared on the second semi final show. He performed a medley of tunes from the Lion King and received three buzzes, When it came to the public vote Vitaly came last. To Watch his Semi Final Performance visit https://www.youtube.com/watch?v=ysJ9t4yu6dY

Delicia Accordions have made an accordion with a see through case, meaning you can see where all the components sit. There are no bellows on the accordion so it can’t be played. A video of the accordion sitting on a turn table at an exhibition. If you have never seen inside an accordion before this is certainly an interesting video. You can see the video  here https://www.youtube.com/watch?v=YhMIvrKKSCE 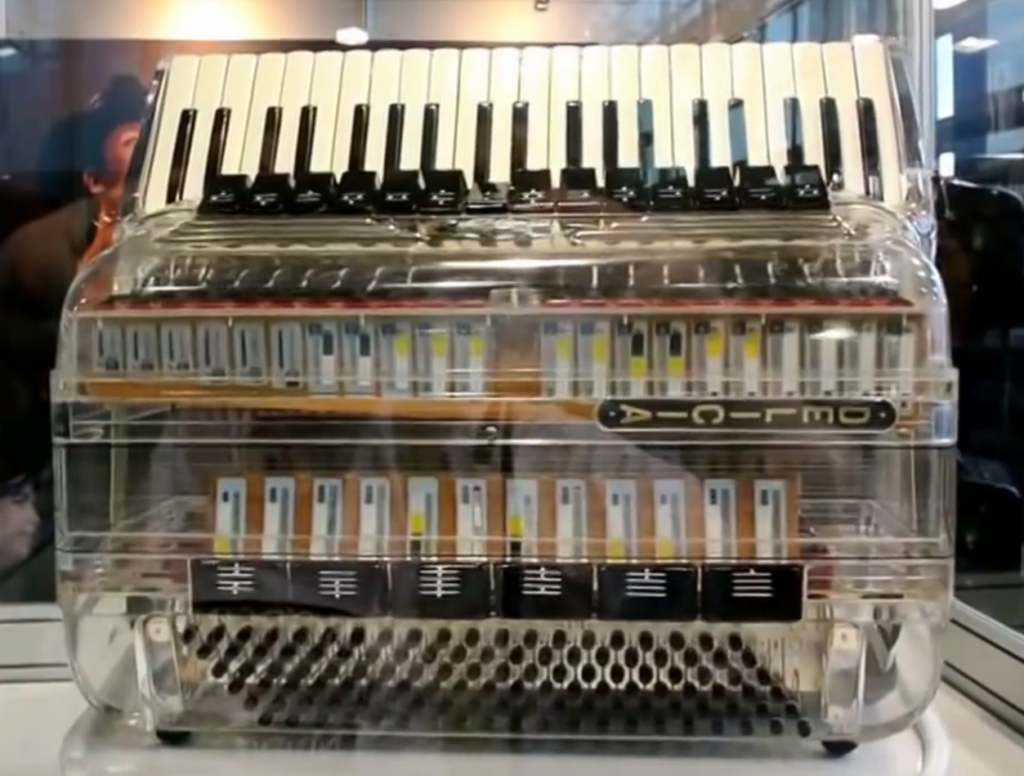 The BBC Needs You….

The BBC are looking for Orchestra Members to join their first Virtual Orchestra and you can play from the comfort of your own home… many a times have we all heard and possibly said “I played that better at home” The BBC are looking for musician and even lapsed musician’s to pick up their instruments learn to play Bizet’s Toreador Song and film themselves playing the piece in time with the  conductor Marin Alsop. The End result will be revealed on 10th September 2016 as part of the celebrations for Last Night of the Proms 2016.  You can find  a link to the sheet music at the bottom of this article, there are 44 different instruments listed on their sheet music page, for each of the instruments there are different levels: Basic, Advanced and full lead with bass stave. There are even a few masterclass videos and tips from ABRSM (Associated Board of the Royal Schools of Music) there are a couple of things to note:

As a thank you, they will be giving away a limited number of tickets to BBC Orchestra events on a first-come, first-served basis as well as a personalised Get Playing certificate for taking part. If you need some help with Musical Symbols visit https://en.wikipedia.org/wiki/List_of_musical_symbols To read more about The Virtual Orchestra visit http://www.bbc.co.uk/programmes/p03m1dpm Where you can download the sheet music from the “Music” page.

Leonard Brown and His Band have brought out a new CD called “Requested by You” The Tracks on the CD are: Willie and Bertha’s Boston, Valse Parisienne, The Craic at Clashmore Hall, Kiwi Pipers, Bayerisch Kraut Polka, Canadian Jigs, Fiddle Feature – Draggin The Bow, Leonard Broon’s Reel, The Rose, Accordion Duet – Bel Fiore, Quickstep Collection, Kate Martin’s Waltz, The More I see You, Ukrainian Polka, The Blue Danube, John Macdonald of Glencoe, Crossing The Minch, Cape Verdean Blues, 17 Jigs, A Fond La Caisse, 19 Danny Boy and Iain MacPhail Reels. The CD Costs £11.95 including UK Postage and is available to buy from his website where you can also hear samples of some of the tracks. www.leonardbrownaccordion.co.uk

Held on the 18th and 19th June 2016 in John & Jackie Romero’s back garden which overlooks onto the Trent & Mersey canal – Just off Junction 18 of the M6. In attendance so far are: The Weaver Valley Accordion Orchestra, North Staffs Accordion Orchestra, Harry Hussey, Stephan Andrusyschyn, Jovan Rnjak and Colin Walker. To find out more or find out about playing at the event call 01606 270148. Last years event raised £470 for the charity Winstons Wish, which added to the overall total of £12,219 that John and Jackie have raised for Winstons wish through their various accordion festivals and this annual accordion magic event.