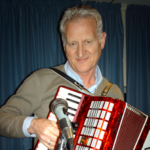 Our April concert started with David Rigby, he got us off to a good start with Snow Waltz and Good Old Summertime, he continued with The Wild Rover, The Spinning Wheel and finally Highland Cathedral. John Lennox was our second player of the night, John started with Let’s Do It as a tribute to Victoria Wood who had just died. Johns session continued with  Two Ladies, Cabaret and Did You Hear The People Sing. Patrick Halpin was on next playing Old Flames, Deep In The Heart Of Texas, McAlpines Fusiliers and Dirty Old Town. Our next player was John Robinson playing Can’t Buy Me Love, Hello Mary Lou, Calico Printers Clerk, This Old House and Floral Dance. It was time for Colin Ensor to entertain us, he started with Corinna Corinna and Fulsom Prison Blues, Colin then slowed down with O Sole Mio, Return to Sorrento and a very nice version of Charmaine. It was now time for the break and a special thanks goes out to Gladys Rigby for bringing Homemade Cakes for us to consume, they were very well received.  After the break we continued with John Robinson playing The Minstrel, Manchester Rambler, Wimoweh (The Lion Sleeps Tonight), The Whistling Gypsy and Burning Bridges (a tune that has stuck in my memory now, and one I will take a look at in future). I was on next playing American Patrol, Red White and Blue and another tune that I can’t remember. To finish the evening off we had Ann Parker playing her last tunes before her shoulder replacement operation. Ann played  Beautiful Days, Snow Waltz and Frog Chorus. To end the night we finished with Rebecca playing My Wild Irish Rose, Under Paris Skies, Valse D’Amelie, Moon River and finally, Anchors Aweigh.                      David Batty

The Priory Club have booked a function in the room for the day on the 20th July, this means we will be unable to use the room in the evening. Please make a note in your diaries/Calendars that there will be no meeting on the 20th July.

This one day event is a great day out for all the family. Over 200 different classic and vintage vehicles are on display along with fairground rides, stalls selling a wide assortment of goods, live performances and entertainment from Spareparts Arts. And it’s free admission. See a wide variety of vehicles including cars, motorbikes, vans, lorries, commercial vehicles, buses – as well as trams. This is the largest free event of its kind. Its popularity has increased through the years with both transport enthusiasts and the local community in Fleetwood.  Under the leadership of a new management team in recent years, the festival has grown with the inclusion of further attractions.  You can enjoy the “SpareParts Festival” again this year, which ran for the first time in conjunction with the event in 2014 and brought transport themed professional arts performances, entertainment and displays to Tram Sunday including professional street artists, There’s plenty of FREE parking with space for up to 2000 cars on Dock Street, and the souvenir programme is free this year too. For more information you can visit the events website at  www.fleetwoodfestivaloftransport.co.uk

The doors open on Wednesday night at 7.30pm for a prompt 8pm start. Arriving earlier than 8pm gives you time for a chat.  If you see someone you don’t know then please say hello and make them welcome at the club.

If you know anyone who would enjoy coming along to our concert nights then please bring them along.

See you on Wednesday.

The London Accordion Orchestra have just taken part in the 12th World Music Festival which were held in Innsbruck, Austria from 5th – 8th May 2016 where they won 2nd place in the advanced orchestra category.  The London Accordion Orchestra were joined by Jenny’s Accordionists who played in honour of Jenny Neal, their conductor, who passed away a couple of years ago they won the ensemble category. The LAO performed Rhapsody by Stuart Hancock and Karneval by Matthew Scott. They also played a piece called ‘Flight’ which was written by their conductor, Ian Watson. The orchestra have been invited to give a joint concert with Nuremburg Accordion Orchestra next spring. The 12th World Music Festival is the biggest competition for accordion and harmonica orchestras/ensembles.

This will be held from the 20th to the 21st of May 2016 from 7pm – 11pm each day with 144 performances, a wide variety of music styles, Dance troupes and comedy acts at  range of venues in Penwortham. A £5 Wristband will get you into all concerts and can be bought from the venues. The Venues are: Aphrodite Health Food Store, Chakra Studio, Cow Shed, Fleece Inn, Gillibrands Fireplaces, Hurst Grange Park Coach House, Integrate Social Enterprise, Priory Lane Young People’s Centre, Salvatore’s, Sir Tom Finney, Slice of Sicily, Spar, St Mary’s Church, St Mary’s Church Hall, St. Teresa’s Social Club, Strictly Cupcakes, United Reformed Church and United Reformed Church Hall.  Later in the year there will also be other dates for your diary with  Longton Live on Friday 8th & Saturday 9th July 2016 and Chorley Live 2016 on Friday 7th & Saturday 8th October 2016.

St Annes-on-Sea Amateur Operatic and Dramatic Society are looking for an Accordionist to play in “Betty Blue Eyes” which is a musical show based on an Alan Bennett Yorkshire comedy, which started life as a very funny film entitled “A Private Function”, starring Maggie Smith. The musical version starred Sarah Lancashire, and had a very successful (though relatively short) run in London, with rave reviews, and later went on tour. Unfortunately, the tour did not extend to Preston or the Fylde Coast. The Show is scored for a 10 piece Band including a busy Accordion score. The society had secured the services of an accordion player who lives locally, but she has just given us back word, saying that she has prior commitments that she had overlooked. This leaves the society in something of a pickle. All the 9 existing members of the Band have accepted a fee of £200 for the week. The Society are desperate to find a replacement Accordionist able to play the Accordion part, the society have contacted us to find out if any of our  members can help. St Annes-on-Sea Amateur Operatic and Dramatic Society are well into rehearsals and the final run-in commences Sunday 22nd May. The schedule for the week of the Show, so far as the Band is concerned, is:-Sunday, 22nd May at 1.00 pm. Band Rehearsal, Monday 23rd May at 7.30 pm. Band Rehearsal, Tuesday 24th May at 7.30 pm. Full Dress Rehearsal. Wednesday 25th May to Friday 27th May Incl). Performances at 7.30 pm each night. Saturday 28th May. Performances at 2.30 pm and 7.30 pm. All the above are at the Lowther Pavilion Theatre, Lytham. If you think you can help please contact Peter Weston on 01253 691995 or 07799 363036, pk.weston@virginmedia.com www.stannesoperatics.co.uk

5th June 2016 the Cleveleys Car Show is a town centre display of sports, classics, American and interesting cars which is free to enter. There will also be cars on the New Promenade as well as a display of model aircraft. A programme of live music and entertainment is planned for the Plaza. www.cleveleyscarshow.co.uk

In the last newsletter we mentioned that accordionist John Romero would be appearing on Britain’s Got Talent, he appeared in the show on the 30th April, unfortunately John received four buzzers which means he is not through to the next round of the competition. Ant and Dec’s comment’s from the wings were great though. From John’s appearance on Britain’s Got Talent he was asked to play the “Going Home Song” on BBC Radio 1.. The going home song has been a feature of Greg James’s afternoon Show for about the last 5 years, It is played at 16:10 every weekday and features 3 listeners singing “My Name is …… and I’m going home” to the tune of Nut Rocker… Greg James suggested that Thursdays Going Home Song could be “John Romero Thursdays”. To view John’s BGT Audition visit https://www.youtube.com/watch?v=aybsCjOUkfA If you’re interested in listening to John’s appearance on Radio 1 visit http://www.bbc.co.uk/programmes/b078xpdx and listen from 12 minutes into the show.

Symphony at the Tower

This will be held from Friday 1st of July to Sunday 3rd July 2016. The event will feature acts performing at Houghton Tower, Sunday is billed as the Symphony Spectacular. The Headliners are Will Young and Joe Bonamassa with a number of other acts which are yet to be announced. All Profits from the event will go to St Catherine’s hospice. To book tickets and for more information you can visit  www.symphonyatthetower.co.uk