Our December night was our annual Christmas Party . This  started with John Lennox, 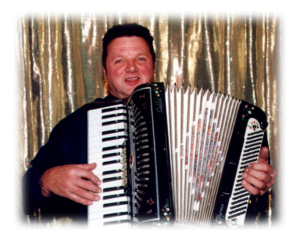 John Robinson, Harvey Seager and Patrick Halpin in an Ensemble, they played a great selection of tunes and had repeated requests to keep going. While they were playing we were setting up the food which had been brought by people donating to our ‘Jacobs Join’. In other countries and locations this is also known as a Pot Luck Meal, Faith Supper, Jacobs Supper or a Bring and Share. I said to someone at the club who asked if I knew why it was called a Jacobs Join that I would mention it in this newsletter. It seems its is a biblical term and its usage is local to various areas (hence the other names for it mentioned earlier). We then started eating the food while Arthur Frankland played fields of Athenry, Danny Boy, Edelweiss, Ashokan Farewell and Midnight In Moscow. John Lennox was on next, playing a selection of tunes on the piano. He started with Let Do It, then went on to play  Love You Just The Way You Are, Mountains of Mourne, La Vie En Rose, If You Love Me and No Regrets. Bernard Belshaw, Harvey, John and Ann Parker played a selection of tunes including White Christmas, Aint She Sweet, Old Bull and Bush, Irish Eyes, Yellow Bird, Jingle Bells, Wooden Heart, Danny Boy, Leaning On A Lampost, Anybody Seen My Girl, Somebody Stole My girl, That’s My baby Now, Baby Face, Blackpool Belle, Roll Out The Barrel, Ma He’s Making Eyes At Me, Oh Jonny and Blaze Away.  After the group Bernard Bamber played solo, he started with Silent Night and Noel, he then played Away In A Manger, Little Donkey, I Saw Momma Kissing Santa Claus, Snow Waltz and In The Mood. Andrew Baker was our next player, Andrew played Sorrento, Winter Wonderland, Frosty the Snowman, Mistletoe and Wine and Good King Wenceslas. Sara Daly was our final player of the night, playing Pigalle, Scarlett Ribbons, God Rest Ye Merry Gentlemen, Little Donkey, Blue Bell Polka, Banjo On My Knee, Grandfather Clock, Bye Bye Love, You Are My Sunshine, When I’m 64, Oh Mein Papa, Edelweiss, Wind Beneath My Wings, It’s a Wonderful World and Walking In A Winter Wonderland. As usual our Christmas night had been a great night of entertainment. Thanks to all those that brought something along to eat, we had a great feast and great entertainment.

The next meeting of the Wyre Club is on Wednesday 24th January at The North Euston Hotel on the Esplanade at Fleetwood, FY7 6BN. Further details tel. 01253 883681.

This Wednesday is a practice night. The doors open on Wednesday night at 7.30pm. Bring your accordion, if you have anything for sale such as an accordion etc. then feel free to bring them along and see if anyone is buying. If you have old music you don’t want, won’t play again or which is cluttering the place up, then we do have a donation pile that is always on the side wall as you come in the door. Feel free to add to or take from it. Most importantly bring yourself for a good chat. Please bring along your friends and anyone who might be interested in attending. If you see someone you don’t know then please say hello and make them welcome to the club.  If you see someone in the street you don’t know, please bring them along to the club!  See you there…

This is to be held from the 9th to the 12th of February.

Come along for a showing of Britain on Film: Railways!  A major new collection of rare archive films charting the history of the UK’s railways and bringing home the romance of rail travel in the early 20th century.  Repeated again on the 8th February 2018.

24th February 2018 at 11am Illustrated lecture – “Alston Hall: Lives of a Lancashire Mansion” by Colin Dickinson

All of the above events are taking place at: South Ribble Museum and Exhibition Centre, Church Road, Leyland, Lancashire, PR25 3FJ

Kicking Off: Women’s Football in Preston

A hundred years ago Preston’s Dick, Kerr Ladies ran out onto the pitch at Deepdale for the first time and impressed a crowd of 10,000 spectators with their skill. They secured a 4-0 victory over the team from Arundel Coulthard & Co – a win that marked the start of their
amazing journey to becoming world champions. Drop into the Discover Preston Gallery to see the display celebrating the Dick, Kerr Ladies success, find out more about their individual stories and take a look at the women’s game in Preston today. The Exhibition is open from 9th Dec 2017 – 31st Jul 2018 at the Harris Museum Art Gallery & Library, Market Square, Preston, Lancashire, PR1 2PP

Festival dates for your 2018 diary

Many people have already paid membership for 2018, this remains at the same price it has always been which is £5 per year.  I keep prices down to make the club affordable while still helping towards our expenses. You can pay your membership January. The proceeds go towards guest artists, stamps for postage, shortfall on room hire on quiet nights and also an Internet service to send out the newsletters to those who choose to receive the newsletter by email (those who get the newsletter by email get working links they can click on rather than have to type in). If you are paying by cheque please make your cheque payable to “David Batty”.

This is to be held from the 9th to the 12th March 2018 at The Carousel Hotel in Blackpool.