Our February concert started with myself playing Triste Sourire, Whispering Hope and 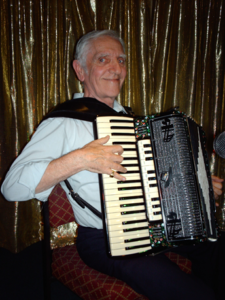 American Patrol. Our next player was Gordon Priestly playing Vienna Forever, No Place Like Home, Rochdale Coconut Dance and melody Moments. Arthur Frankland then took ot the stage and gave us Amanda’s Waltz, Sarah’s Waltz, Midnight In Moscow and Little Maid Marion. It was Patrick Halpins turn to play, he  joined Arthur on stage, and they played Danny Boy, The Fields Of Athenry and Loch Lomond. Our next player was Richard Brown who had come down from Carlisle to visit the club, he was making his debut at the club playing My Wild Irish Rose, Slievenamon, Bunch of Thyme and Isle Of Tirree. Colin Ensor then took to the stage and played Down Forget Me Not Lane, Ashokan Farewell, Once In a while and Charmaine. Our next player was John Robinson playing great versions of Hello Mary Lou, Money Can’t buy Me Love, The Minstrel and Blaydon Races. It was Rebeccas turn to play, she started with Waltz D’Amelie and continued with Moon River and Waltz Continental. Ann Parker followed Rebecca, she played  Chopsticks and Under Paris Skies. After Ann we had Bill Agnew Playing Twilight Time, Lady Of Spain, Begin The beguine, I Don’t Know Why, You Made Me Love you, O Bla-De O Bla-Da, Cuckoo Waltz Happy Days and Lonely Nights, Sweet Sue Just You, The World Is Waiting For The Sunshine, Pretty Baby, Achy Breaky Heart, La Paloma, No Regrets and O’Susannah. We were now getting close to the end of the night, and just nicely timed to fit the last two players in, firstly Reuben Hickinbotham played All Of Me, It Had To Be You, April In Portugal, Around The World and I Love Paris, this was then followed by Bernard Belshaw playing Ain’t She Sweet, This Is My Song, If You Love Me, Blaze Away, Ave Maria and Nessun Dorma.

There are some folders to hold sheet music in, they already have some music in them but please take them and do what you want with the music inside them, you can reuse the folders for your own music. On Wednesday night These folders will be on the second table in from the door, please help yourself.

This Wednesday is a guest artist night featuring Robert Burton. Robert has played at the club several times in the past and has always gone down well. Make sure you bring along your best singing voice because there won’t be many tunes or songs you don’t know. Bring along family and friends for a good enjoyable singalong night of entertainment.  The doors open on Wednesday night at 7.30pm for a prompt 8pm start. Arriving earlier than 8 gives you time for a chat.  If you see someone you don’t know then please say hello and make them welcome to the club.

The Artists featuring at Blackpool Accordion Festival are: David Vernon, Alan Young, Bert Santilly, Pearl Fawcett, Stefan and Denise Andrusyschyn, Rosemary Wright and Harry Hussey. The festival is being held on the 8th – 13th May 2016 at the Norbreck Castle Hotel in Blackpool. To book telephone Sceptre Promotions on 01780 782093.

Bikers from around the country gather to show off their vintage machines. The exhibition takes place outside Bury Transport Museum Bolton St, Bury BL9 0EY

The Dublin Legends in Preston

Formerly of The Dubliners In 2012 The Dubliners celebrated 50 years on the road but following the sudden death of founding member Barney McKenna and John Sheahans’ decision to retire it was agreed that The Dubliners, as a touring band, would come to an end and The Dublin Legends were born.

The Dublin Legends, Sean Cannon, Eamonn Campbell, Paul Watchorn and Gerry O’Connor, have over 60 years of performing with The Dubliners between them and will continue to play all the classic songs and ballads known the world over; Whiskey in The Jar, Dirty Old Town, The Wild Rover, Seven Drunken Nights, The Rare Auld Times, Molly Malone, The Irish Rover, Black Velvet Band & many more. The Dublin Legends, Irish Folk Music at its very best.  9th May 2016 at Preston Guild Hall, Lancaster Road, Preston, Lancashire, PR1 1HT. Tickets cost £23 and can be booked online at www.prestonguildhall.com/events/view/233 or telephone Preston 01772 804444.

We only found out after the event so could not promote it at the time, but there was an Accordion Repair Course held on the 17th & 18th February 2016 in Teddington, London.  The first day covered the working parts of the accordion, how the treble and bass switches work and common problems.  Also reed block configurations, voices, how to undertake minor repairs, including valve replacement, sticky keys and switches, changing bellows gasket and general fault finding.  The second day was a continuation of the first day with an overview of instrument tuning. The cost of the course was £75, the days started at 9:30am and finished at 4pm. The organiser of this course Peter Le Geyt can be contacted on 020 8977 6680 or email plg@plgmarketing.com to find out about similar courses in the future.

A Night of Stargazing

From 7pm – 10pm on the 18th March 2016 Brockholes Nature Reserve are holding an unforgettable night under the stars, as they take you on an incredible journey through the constellations and along the Milky Way! There will be powerful telescopes for you to gaze through, all operated by experienced amateur astronomers, who will answer your questions. Even if the weather doesn’t co-operate there will still be talks, videos and hands-on help with telescopes. Please note this event is for ages 16+ only. Tickets cost £11.95 which include refreshments and parking. Brockholes Nature Reserve, Jct. 31, M6, Preston, Lancashire, PR5 0AG. Book Online at www.brockholes.org/events_calendar/day/2016-03-18  Telephone 01772 872 000

25th to 29th August 2016 – Dorset. This is not solely a music festival but there are quite a few folk/music concerts at this huge event. There will be over 500 Stalls, 200 working steam engines, 2,000 other working exhibits, Fairground Rides, a Variety of vehicles on display and more spread over 600 acres.  www.gdsf.co.uk

Lytham Festival – 4th to 7th August 2016 – Lytham. Variety of acts over four days for a list of acts and  other information visit www.lythamfestival.com

The Band of the King’s Division in Concert

The Band of the King’s Division is one of the premier bands of the British Army and is in constant demand for appearances across the world. With a broad repertoire to suit all tastes, the musicians have a highly acclaimed reputation. They are in concert on 6th May 2016 at The Marine Hall , The Esplanade, Fleetwood, Lancashire, FY7 6HF. Tickets cost £11 To Book Tel: 01253 887693 or visit www.marinehall.co.uk

Why Accordions Are Pitched Sharp

Did you know that the reason accordions are pitched slightly sharp is so that in the early days they could be played in an orchestra with “just intonation” instruments like violins, voice, horns, woodwinds. When they go higher in pitch, they (horns etc.) tend to “lip the pitch” or bed it upward due to lip pressure. Working with the accordion would now make the accordion sound ‘flat’ and therefore bad. So most accordions were tuned 442 to avoid this problem in orchestras, and all ‘true’ studio professionals utilize this procedure to this day. You may find some manufacturers who tune their accordions to concert pitch A at 440 but most tune slightly sharp to allow the instrument to happily co-exist alongside other instruments in an orchestra or band.