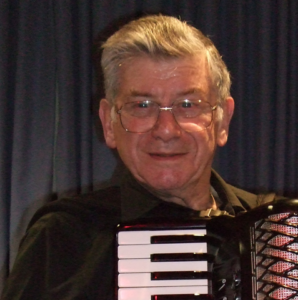 and Padam Padam. Our next player was Graham Crow playing 76 Trombones, Something Stupid and A German March. Next on stage was Bernard Bamber playing Your Cheating Heart, Take These Chains and Mothers Old Armchair.  It was time for our guest artist Harry Hussey to start his first spot of the night. Harry started with But Beautiful and Black and White Rag. Harry continued taking requests from the floor and for the rest of the night, as is usual at one of his concerts, he played exactly what people asked for. Harry continued with .Jealousy, Tea for Two, Chicargo, Cry Me A River, Sweet Georgia Brown, Rampart Street Parade, Skylark, 12th Street Rag, Unforgettable, Lady Of Spain, A Nightingale Sang In Berkeley Square and finally to lead up to the break he played You Are Beautiful. After the break we heard from   Colin Ensor, Coling played Please, Conquest Of Paradise and C’est La Fiesta. Our next players was Reuben who gave us Chanson D’Amour, Danny Boy, Mocking Bird Hill, Answer Me, As Long As He Needs Me, Smile and Arrividerce Roma. Bill Agnew was our next player, Bill started with Let Him Go Let Him Tarry and McNamara’s Band, he continued with Inky Pinky Parlez Vous, The Man Who Broke The Bank At Monte Carlo, Someone To Watch Over You, Viva Espania and Never On A Sunday. Harry Hussey returned to the stage and started his second spot of the night with Georgia, he continued with Don’t Laugh At Me, Blaze Away, The Whistler And His Dog, The Sunshine Of Your Smile, Les Bicyclettes De Belsize, Beer Barrel Polka, A Foggy Night In London Town, Autumn Leaves, Nola, Dark Town Strutters Ball, St Louis Blues, New York New York, Volare, Genevieve, The Harry Lime Theme, Chatanooga Choo Choo, Sorrento, Midnight In Moscow, Honey Suckle And The Bee, Daisy and finally, Show Me The Way To Go Home.
Neither myself or Rebecca could be there to run the concert night so rather that not put on a concert, I arranged with Harry for him to run his own night at the club with Ann parker on the door and refreshments while, for the newsletter, Colin Ensor made a note of the tunes played on the night.  Thanks go to Ann, Colin and Harry for ensuring the night went ahead despite our absence.

The Chester Accordion Club’s next meeting is on Tuesday, 23rd February 2016. The venue is The Groves Club, Chester Road (A5032), Whitby, Ellesmere Port, Cheshire. For further details, telephone Lynn McCallum on 0151 339 9850.

This Wednesday is a Local Players Concert featuring our own local talent. If you are a player then please bring your accordion along and give us a tune. If you have never played on stage before then this night is an ideal night to play in front of a supportive audience. If you are an audience then please come along and do your best audiencing.  The doors open on Wednesday night at 7.30pm for a prompt 8pm start.  Please bring along your friends and anyone who might be interested in attending. If you see someone you don’t know then please say hello and make them welcome to the club.

The First Skipton Accordion Festival is to be held from Friday 25th  to Monday 28th March at the Rendezvous Hotel in Skipton. The Artists are: Paul Chamberlain, Julie Best, Jean Corrighan, Harry Hussey, Gary Blair, and John Romero. The cost of the festival is £239 per person half board, the single room supplement is £30. There is still plenty of time to book for this festival contact Carillon Studios on 01606 270148 or visit www.carillonstudios.com

Below is the festival program:

We have been contacted and asked if there is anyone who would be able to offer a lift from Lancaster for a club night, please contact rick by email at  rick.johnson262@btinternet.com

On Thursday 17th March at The Platform, Station Buildings, Morecambe LA4 4DB. The Yves Lambert Trio consist of Yves Lambert (vocals, melodeon, harmonica, jaw harp, and percussion) Olivier Rondeau (guitars and voice) and Tommy Gauthier (violin, bouzouki, mandolin, vocals) will be playing. Tickets cost £14.00  and can be bought from The Visitor Information Centres in Morecambe and Lancaster, by phone on 01524 582803 and online at uk.patronbase.com/_ThePlatform/Productions

Aly Bain was responsible for launching ‘The Transatlantic Sessions’ TV series in which both he and Phil continue to feature. Accordion player Phil has been named as one of Scotland’s 25 most influential people and his mastery of the instrument has led to him working with the likes of Mark Knopfler, James Taylor and Midge Ure. Together they are simply the best traditional musicians you are ever likely to hear. 16th April at The Platform, Station Buildings, Marine Road Central, Morecambe LA4 4DB. Tickets cost £14.00  and can be bought from The Visitor Information Centres in Morecambe and Lancaster, by phone on 01524 582803 and online at https://uk.patronbase.com/_ThePlatform/Productions

A three day music festival is being held in the village south west of Leyland which was hit by the Boxing Day floods. Croston Fest is being organised to try and raise some money for the Croston Relief Fund and bring “a bit of happiness back to the wonderful village”.

Held on Friday 26th to Sunday 28th February, the festival is to have over 50 different acts performing all around the village, in venues including the Black Horse, Croston Sports Club, The Crown, Fresco Fresco’s, Grapes, Lord Nelson, Panshi, Wheatsheaf

Volunteers are needed to make sure the weekend runs smoothly, including wristband sellers and people directing to car parks.

Wristbands for access to all of the venues are £5 and can be bought from any of the pubs in the village, Under 18s are free. All money from wristband sales will be going to Croston Flood Relief. If you are interesting in helping, you can find out more by emailing Stu on donate@crostonfloodrelief.org.uk. Volunteers have to be over 18 and will get a wristband giving them access to all the venues for the weekend. The full line-up of musicians performing will be announced nearer the time. For more information visit www.crostonfloodrelief.org.uk

An Agreement has been reached in the “Happy Birthday To You” Lawsuit, Warner/Chappell Music have agreed to pay $14million which is roughly £9.7 million, once this settlement is approved by the US Court on 14th March, It will mean that “Happy Birthday To You” will be in the public domain. The Settlement money will be distributed between anyone that paid license fee for the song dating back to 1949. The Group of Artist and filmmakers who brought about this lawsuit said the settlement was “unquestionably an excellent result”.  People singing Happy Birthday in their houses have never been at risk of a lawsuit, for the song to be sung in a film/TV etc a licence fee had to be paid to Warner/Chappell Music… until now.