Our March concert started with Graham Crow playing over The Rainbow, Malaguena, 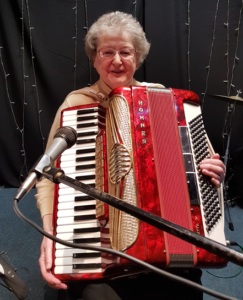 Granada, Boulevard Of Paris, Laughing Samba, Wedding Samba, Coffee Song, Enjoy yourself and Lets Have a Party. Our next player was David Rigby, he started with Loveliest Night Of The Year, then went on to play The Good Old Summertime, Irish Eyes, Daisy, Spinning Wheel, Wild Rover, Snow Waltz and Highland Cathedral. We had a player come to visit us from Scotland which was a nice surprise. Janet Graham had been playing as a guest artist in Scotland when she decided to travel down to Leyland to pay us a visit. Janet was more than happy to play for us, she entertained the crowd with Happy Harry Polka, Richard Hughes of Tobermoray, Edwin  Flose of Wyre, Primrose Valley, Cape Breton polka & Jig, Craic At Clashmore Hall, and Rural White.  We then had the break, where, as usual,  lots of social intercourse took place. After the break I started the second part of the evening with Black Mask Waltz before handing the stage over to Graham Driver. Graham played Buttered peas and Upton On Severn Stick Dance. It was now time for John Robinson to play, he played I Feel Fine, Wimoweh, Calico Printers Clerk, Gypsy Rover and Burning Bridges. Patrick Halpin was next on to the stage, he started with Red River Valley and then continued with Wild Colonial Boy, Galway Bay, Fields Of Athenry and A Working Man. Gordon Priestly was on next. Gorgon played La Noye, Vienna Forever, Much Wenlock, Prolock, Rochdale Coconut Dance and Weasels Revenge. Colin Ensor then entertained us with Please Don’t Talk About Me When I’m Gone, The Mist Covered Mountains, Back Home Again, Charmaine and Dancing With Tears in My Eyes. Our next act was Ann Parker playing Frog Chorus and Beautiful Days, this was followed by Bernard Bamber playing Paper Roses, You Are My Sunshine, You’re The Only Good Thing That’s Happened To Me, He’ll Have To Go and In The Mood. Our next performance was from Bernard Belshaw, Harvey Segar and Bob Seed playing Ain’t She Sweet, La Mer, This I My Song, Blaze Away, Ave Maria, La Combanchero, Down At The Old Bull and Bush, Maggie, Stranger In The Night, Entry Of The Gladiators and Spanish Gypsy Dance. To finish the night we had a second performance from Janet Graham at our request. She was happy to return to the stage and play us out with There’s No Place Like Home, Janet Two Step, Please Help Me I’m falling, My Happiness, Take These Chains, your Cheating heart and, to finish the night,  a set of marches. It had been a great night with a great variety of tunes played with great style from all our players. Thanks go to Janet for visiting us and showing us her style, which went down really well with the audience. David Batty

IMPORTANT NOTICE …..No Meeting on the 18th

problem with the function room. The problem is being fixed next week so the room is off limits to everyone. This means Our next meeting will be the 2nd May 2018

Chester Accordion Club’s meet on the second Tuesday afternoon and the last Tuesday Evening of the month at The Groves Club, Chester Road (A5032), Whitby, Ellesmere Port, Cheshire. Telephone Barry Graham on 01978 760065.

Wyre Club meet on the fourth Wednesday of the month at The North Euston Hotel on the Esplanade at Fleetwood, FY7 6BN. Further details tel. 01253 883681.

This is unfortunate, but unavoidable, maintenance and repairs do have to take place, and its many years since they had a shutdown of the room for refurbishment. That was when Julie and Jean were due to be guest artists and the concert was held in the church instead.

I am going to use the night to find some new tunes for the next concert night, something I am not known for, something I haven’t played before or something from the dim and distant past that I had forgotten about.

I will see you all at the next night on the 2nd of May, which will be on, the room maintenance will have been completed by then. David Batty

This special one-day accordion event, organised by the North Staffs Accordion Club, it is open to all interested accordionists and also those who enjoy singing. Proceeds from the day will go to the Alzheimer’s Society. In the morning 11am until 1pm, there is a workshop/rehearsal, and after lunch a concert involving locals and others singing to accordion accompaniment. The afternoon, 2pm until 5pm, also includes some special accordion solo performances from Karen Street, Karen Tweed, Pearl Fawcett-Adriano, Julie Best, Barry Graham, Helen Rich, Mike Richards & Paul Hobbs.

A Small number of non playing members will be enjoying a leisurely morning walk in the flat countryside in the Marthall area. Any other non players, transport managers and accordion carriers will be welcome to join the group. The route and length of the walk will be determined on the morning according to the needs of the party and the weather condition. It will include a visit to the nearby deli/café to sample local fare with a return in good time for lunch at The hall at Marthall.

Participants are asked to kit themselves out with a waterproof jacket and appropriate boots or strong shoes. The fresh air and exercise will prepare lungs for a lusty sing song in the afternoon.

Bring your own packed lunch or reserve a pie and pea lunch, charged separately at a modest £3.50. Tea and Coffee will be provided on arrival and at lunchtime.

Music for the workshop is available in advance by email. Tickets are £12 for players, £3 for audience/chorus; for further information/music/tickets contact Steve Hughes on 01782 787935 or email

Following a fantastic inaugural event in 2017 Halways Manor are delighted to be welcoming back the Melodeon Workshop Weekend with the dream team of Andy Cutting, Anne Niepold (Belgium) and Hazel Askew. The programme will include beginners, intermediate and advanced workshops with each tutor, plus some optional workshops, time to socialize and take part in informal sessions, and an informal tutor’s concert on the Saturday evening. The course is for Players of the D/G melodeon (diatonic button accordion). All abilities welcome; there will be workshops for beginners (defining ‘beginners’ as people familiar with the basics of the instrument but still getting to grips with things like right and left hand co-ordination and row crossing), intermediates and above, with plenty to stretch the imagination and ability of advanced players. The Team Andy Cutting hailed as one of the country’s most beloved folk musicians and 2016’s BBC Folk Musician of the Year (for the third time), Andy is an emotive and engaging performer, and a warm and witty tutor. A soulful and technically outstanding melodeon practitioner with an ear for a fine tune, as well as a thorough grounding in the English tradition.

From Belgium, Anne Niepold is a virtuoso of the diatonic accordion, known for her dynamic, original and spirited style. She is a passionate tutor with almost 20 years experience, and holds a teaching diploma from the prestigious Brussels Royal Conservatoire. Anne has taught courses for all levels of ability across Belgium, and in France and Germany, but this will be one of her first visits to the UK.

Hazel Askew is a London based melodeon player, singer and musician. She has worked as a performer on the folk scene for many years, most notably with BBC Radio 2 Folk Award. She regularly runs melodeon courses for EFDSS as part of their Saturday Music Workshop series in London. Hazel has also led workshops and courses for organisations including Barbican Creative Learning, Folkworks, Aldeburgh Young Musicians, Dartington Summer School, Shakespeare’s Globe Theatre and as well as various festivals around the country.

Non Resident (all meals except breakfast, and activities:) £139

The Episode of the accordion being repaired was repeated again on BBC Two. If you missed it and were interested in watching it, you can find it on BBC Iplayer at http://www.bbc.co.uk/programmes/b08l5bjk

Someone has told us of this website with Dale Mathis, where there are a large number of Youtube lessons on techniques and music along with PDF’s of the music https://www.mycrownmusic.net/accordion-lesson-videos.html You can read the sheet music (if you like) while following him as he plays on the videos. This is ideal for people looking for an easy way to learn new tunes. In the past we’ve also written about Sheila Lee who has written many pieces of music specially for the accordion covering: Christmas, 60s,70,80’s and other traditional music https://shelialee.wordpress.com/

Sharon is performing on the 20th May 7:30pm at the Waterside, 1 Waterside Plaza, Sale, Trafford M33 7ZF The event description is “Sharon Shannon is a musician who likes to surprise. While she is best known for her arrangements of traditional Irish tunes and Irish-influenced compositions, she has always been eager to explore new styles, and to meet and work with other musicians. There are Irish influences here, of course, but these are cheerfully mixed in with often unexpected styles from around the world, including – for the first time – Africa.

Sharon has perfectly mastered an African/Irish crossover. But Sacred Earth is more than this: musical elements from the classical world, the Shetland Fiddle Tradition, Hip Hop, country and blues all conspire to make this album a ground-breaker.”  Tickets cost £20  and can be booked online at https://watersidearts.org/whats-on/2229-sharon-shannon/ or telephone 0161 912 5616

Sharon Shannon will also be at Selby Town Hall on the 18th May tickets cost £20 and can be bought at http://www.selbytownhall.co.uk/events/event.php?name=sharon-shannon-2017 or telephone 01757 708449

An intensive weekend for piano accordion players of all ages and abilities! Intermediate / advanced students will spend a day each working with Murray Grainger and Paul Hutchinson, while Jane Ward will work with beginners making sure all levels get the most from the weekend. There will be work on technique, repertoire and interpretation of folk tunes in small groups, plus informal evening sessions and a Saturday night tutors’ concert.

The course is aimed at piano accordion players from beginners to advanced – Beginners: Jane’s beginners’ group is ideal for those who have played a little; you’ll need a very basic knowledge of your instrument. We work from music, but it would be (and has been) possible for non music readers to learn by ear. The Team Paul Hutchinson studied piano and church organ before being persuaded at the age of 17 to take up the accordion and form a ceilidh band. Since then he’s become one of the best-known and in demand players on the folk scene – in the UK and beyond. Paul is a regular tutor and musician at Halsway Manor, and the accordion tutor for EFDSS at Cecil Sharp House.

Murray Grainger is an innovative accordionist. Whether working with the finest orchestras, pushing the boundaries with his traditional projects or teaching around the UK, Murray is at the forefront of the British accordion scene. Trained in the classical accordion at The Royal Academy of Music, Murray has been a tutor in both classical and folk accordion at Chetham’s School of Music.

Jane Ward has been playing accordion for 50 years. She performed extensively around Europe as lead player in Jenny’s Accordionists, and played in Scottish, German and Polish bands before agreeing to play for a morris side 28 years ago and discovering folk music! She also tutors at Canterbury Folk Days, Burwell Bash Summer School, and Cecil Sharp House.

Non Resident (all meals except breakfast, and activities): £139