Our January concert was not an ordinary night, We had a TV crew in the club filming for a BBC Programme called “Put Your Money Where Your Mouth Is” We started the night off like normal with local players, Ann Parker took to the stage first playing Accordion Polka, Snow Waltz and My Florence. Colin Ensor was up next, he played Forget Me Not Lane, Charmaine and Sweetheart Of All Dreams. It was now time for our Guest Artist George Zuchowski to make his debut at the club. George is new to the club scene and an unknown as far as our members were concerned, but they were not to be disappointed. George started his first spot playing Pigalle, Lara’s Theme and Under Paris Skies. I heard comments that we had found a great player and that people were really enjoying what they had heard so far. George continued with Besame Mucho, Return To Me, Perhaps, Clarinet Polka, I Love Paris, C’est Magnifique, When I Walk In, All Of Me and Graj Skrzypku Graj. While George was playing this last tune the tv crew were at the back filming a piece to camera and commenting on George playing. The music continued with Adios Muchachas and Tango Milonga. After George played a few tangos he carried on with Maigret, Radio Valse, Tylko W Lwowie, Never On A Sunday, Isle Of Capri, Play to me Gypsy and My Little Boy. George Finished the first half playing Monseur Frivol. although George was not able to finish playing it because half way through the tune the strap on his accordion came off . It was now time for our break which was a longer break than normal because we had the film crew in they were auctioning off an accordion which had been bought at an auction elsewhere. While we had our break Paul Hayes the expert who bought the accordion was walking round the room talking to people while they tried the accordion that was being auctioned and the cameraman was filming the members. We held the auction near the end of the break, the accordion sold for £70. It was interesting to see how they filmed the programme and it was a good opportunity to publicise the club on TV. The programme goes out in the autumn, fingers crossed it will encourage more people to come to the club. It was time to carry on with the evening, with a few more local players, I played American Patrol and Magic Roundabout. Graham Driver played Weasel’s revenge, Jacqueline Waltz, Crabfish Step Dance, Lovely Nancy and Upton On Severn Stick Dance. It was time for George to return to finish the night, he started his second spot with Monseur Frivol which was the same tune George was not able to finished just before the break, George continued with FBI which is a shadows tune, Kon Tiki, Red Rose Café, Bel Viso, Retour Des Hirondelles, Far Away Place, True Love , Bourasque, Tico Tico and Charmaine. We had enjoyed a great night from George, we liked it so much he is already booked to play for us again in November 2012 !

This Wednesday is a local players night featuring a concert by our local talent. Please remember to bring your accordion and give us a tune. We love to see all levels of players from beginner to professional at our local players nights. I think that is one of the features of the club, we encourage all levels to develop their skills in a supportive environment. Please Remember to bring any friends or family to this entertaining night. Doors open at 7.30 for an 8pm start. Make sure you get there early for a good seat and a good chat. See you there.

A YouTube video with 5 North Korean Accordionists playing an 80s pop song “Take on Me” by the group A–Ha has gone viral, the video was filmed in December but it was only uploaded to YouTube on the 1st February and at the time of writing the video has had 1,043,565 views. The video came about when artist Morten Traavik who was visiting a North Korean music school looking for an Accordion Ensemble to provide the soundtrack for the Barents festival, When Morten Met the Ensemble he took a few samples of Norwegian music ranging from classic to pop for the students to practice to for the forthcoming tour, he gave the students the CD on Monday night and on Wednesday Morning the students surprised Morten by playing him their own improvised version of the pop song Take On Me. Morten made a video and decided to post the video to YouTube to promote the festival and from there the video has gone viral world wide. You can watch the video at https://www.youtube.com/watch?feature=player_embedded&v=rBgMeunuviE

Steve Roxton’s Appearance On The One Show

Last Month we told you about Steve Roxton due to appear on the One Show on Friday 15th January. We hope those of you who get the newsletter by email managed to watch the show live and see Steve’s performance, The show was on the BBC Iplayer website for a week after the show went out live, If you missed catching the show on the Iplayer There is a link on Steve’s website to watch the section of the show he was on www.steveroxton.co.uk. Steve received a standing ovation for his performance, the show was hosted by Chris Evans and Louise Minchin. It was nostalgia all the way as the presenters, along with special guests Giles Brandreth, Ray Winstone, and Martin Freeman, acting as judges, gave acts that had won “Opportunity Knocks” back in the 1970′s, the chance to show the world “THEY STILL HAD IT“. With only a 30 second slot each, to impress the invited studio audience of mixed ages, from all walks of life, that they were still top entertainers, it was a real test of their ability. Unlike many TV programmes which are pre-recorded, The One Show goes out live so it’s one chance only. Short clips of the original Opportunity Knocks performance were shown before each artiste performed, and Steve’s wife Maggie was in the one show audience as she had been in 1978. Still his inspiration and support.

Put Your Money Where Your Mouth Is.

We had a call from TV Presenter Paul Hayes who is an Antique expert from Morecambe, you may know him from programmes such as Cash In The Attic, Bargain Hunt, and Housecall. “Put YourMoney Where Your Mouth Is” is another show he is currently involved in, this is shown each weekday at 5:15PM on BBC2. The show features experts who put up their own money to buy items at auctions, car boots etc and then they sell the items they bought to a good home, there are two experts competing against each other to see who can make a profit, with all profit going to charity. Paul had bought an Accordion at an auction and came to the club to auction it off, The Accordion was a Pietro Americano Deluxe, there was no reserve for the accordion and the highest bidder of £70 took this accordion home with them.. here are some pictures of the filming. We know quite of few people who were there on the night were filmed talking to Paul and trying out the accordion before the auction. We sent an email out to let people know there would be a film crew at the club but we were too late to put the news in the newsletter which had just gone out before Paul rang us. We don’t know what is going to be shown on the programme but we think we will be on the programme for at least 5 minutes if not longer, who knows you might spot yourself on the programme. As soon as we know when the programme is going to be shown we will let you know. 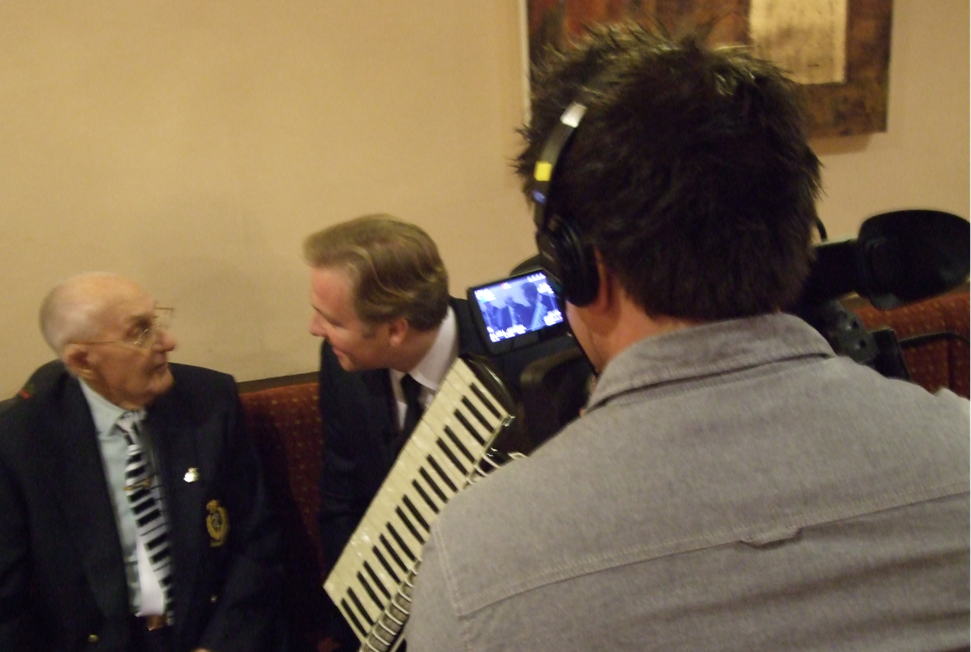 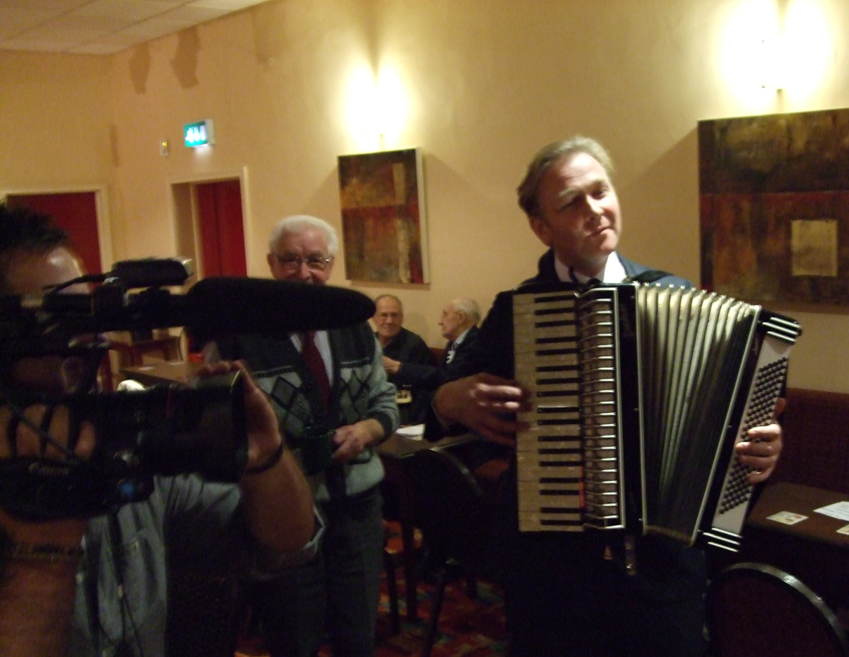 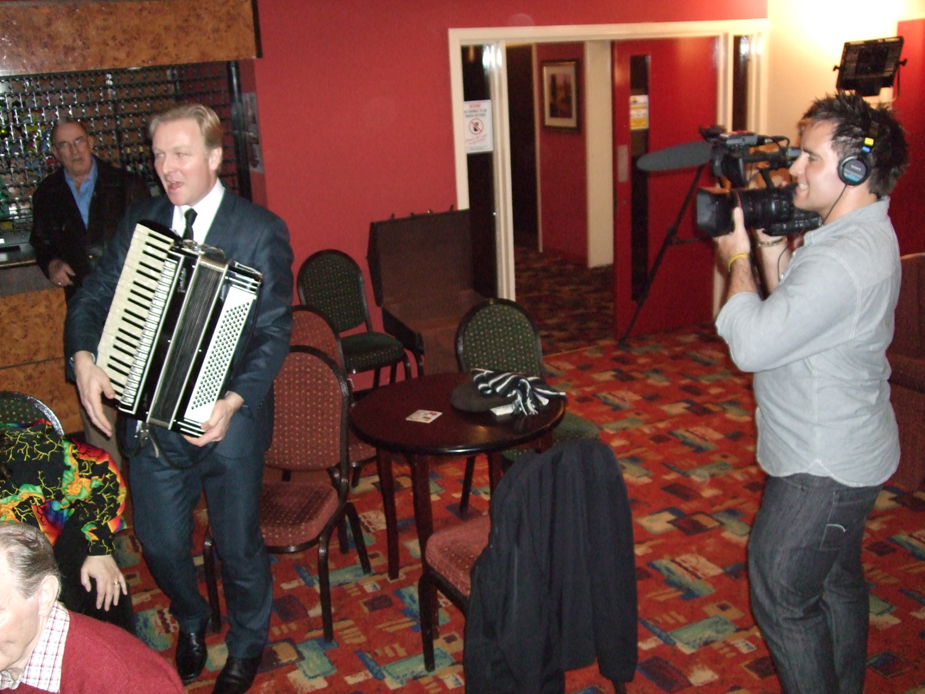 A little while ago we told you about a new brand of Accordion called Black Diamond launching at the Seacroft festival, We have just received Black Diamonds Brochure with a price list, we were passing it round for people to look through at the last practice night, If you would like to look at it, it will be on the table with the newsletters or just ask myself or Rebecca to see it. We only have one copy so please take a look at it and pass it along for other people to look at too.