Our July concert started with Norman McLaren playing Glen Coe, The Skye Boat Song, Scots Wha Hae, Flower O’ Scotland, Have A Bunnet Trimmed With Blue, MacFarlane O’ The Sprots O’ Burnieboozle and Bonnie Lass O’ Fyvie. Albert Draper then took to the stage and delivered a monologue entitled The Lion And Albert. John Lennox was up next playing Cabaret, Lili Marlene, Falling In love Again, Hymne A L’Amour, The Accordionist, No Regrets and Padam Padam. To take us up to the break I played Saliors Hornpipe, Triste Sourire and Round Britain Medley. It was now time for the break, there was a lot of chat going on and I was sorry to have to stop the chat by announcing our next player Bernard Bamber, Bernard started his spot with Old Flames, then continued with a selection of Irish tunes consisting of Fields of Athenry, Galway Bay, Fourty Shades Of Green, O Danny Boy, Rose Of Clare, Donegal Shores and Green Fields Of Ireland. Our next act was Rebecca Parker who started with My Wild Irish Rose then continued with Moon River, Home on the Range and to finish she played Zingerella. Sara Daly then played a selection of tunes but unfortunately I didn’t see her at the end to find the titles. Graham Driver followed Sara and played Jacqueline Waltz, Much Wen Lock, Upton On Seven Stick Dance and Weasels Revenge. It was almost the end of the night now so Myself and Rebecca played Plasir D’amour as a duet before finished the night with Singing I’m My own Grandpa and finally ending the night with a selection of going home tunes that ended with Now Is The Hour. We had a few people at an accordion festival and many on holiday in July but that had not stopped us having a great time. It was surprising how fast 11pm came round. Thanks to all the above who entertained us and gave us a great night.

This Wednesday is our local players concert. As you know, this is a variety night of entertainment and a great chance to meet old friends and make new ones. Accordionists please remember to bring your accordions, we look forward to hearing you play. Please Remember to bring any friends or family for a good night out, it would be nice to increase the number of people enjoying our concerts. The Doors open at 7.30 for an 8pm start. If you get there early you can have a good chat with other people prior to the start of the club. If you see someone you haven’t met before then please say hello to them, they will probably be quite pleased that someone came over to speak to them. Remember, if you have an accordion, music or anything accordion related to sell then concert nights are an ideal night to bring them along and possibly make a sale.

We welcome suggestions for who you would like to see as a guest artist for next year, or maybe you’d like to see one of this years guest artists come back next year? Let us know so we can book the artists that you want. We often have to book guest artists well in advance so I am looking at 2012 at the moment.

On the 1st of August there was a concert in Leyland featuring John Romero on Accordion. You normally hear about John in this newsletter as being the organiser of Eastbourne Accordion Festival. As well as a festival organiser, john is an accomplished accordion player. It is rare for John to play so far north when played at Leyland. The night, which was well attended featured two 45 minute spots with John playing his Midi accordion. John played mainly electronic sounds which went down well with the crowd which are used to visiting an organ club. The night featured the fastest raffle in the world, the tickets and colours were read out at the rate of about one every 3 seconds. There were about 20 prizes in total and the whole raffle had lasted less than a minute! People round me were saying that they missed most of the numbers so each person had to visit the raffle table to see if they had won anything. The admission was £5 and the night ended at around 11pm. The selection of music ranged from The Doctor Who theme through to Under Paris Skies. Most of the sounds came from the keyboard connected to Johns accordion and he gave the audience a good demonstration of how he was playing the keyboard via his accordion. I was seated in the organ loft as you can see from this photo. 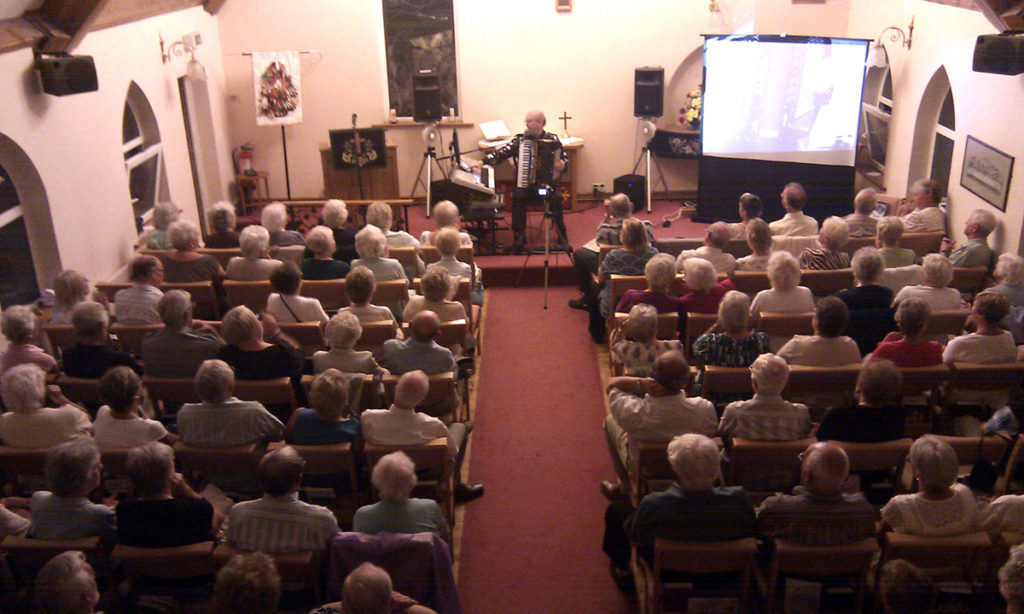 Two days before the wyre club were due to have their July meeting, they were contacted by the venue (The Ashley Club in Thornton-Cleveleys) to say their July booking and future bookings had been cancelled and replaced with a weekly slimming club. This decision by The Ashley Club to cancel the accordion club with just two days notice so they could replace them with a slimming club left no time to find an alternative venue so their july meeting had to be cancelled. Since that shock and subsequent cancelling of their night the Wyre Accordion Club have since found a new venue. The club will now meet at the North Euston Hotel on the Esplanade at Fleetwood, FY7 6BN. The wyre club have said “it is an upgrade to the standards of our previous venue and we feel people will like it and be impressed”. The Wyre club never book guest artists, as a result their funds are quite healthy, for this reason the next few meetings at the club will be free admission . The next meeting of the Wyre Club is on 24th August 2011 Further details are on Tel. 01772 864887.

Frank Scotts widow is selling his Red, 72 Bass, Delicia Piano Accordion. The price is £600 o.n.o. Also on sale is a Yamaha Keyboard for £500. His Electric Wheelchair was bought two weeks before he died and has only had 20 minutes use, it is a Rascal Powerchair model p321. The electric wheelchair cost £1500, two weeks later and after just 20 minutes use it is going for the bargain price of £950. For further details speak to June Spencer, June is helping Franks wife with the sale of his effects, she can be contacted on 01257 230167.

Red Galotta 2 voice melodeon This melodion was bought new but never played. The right hand is in the key of C Major and has a thumb strap, The left hand is C and Am on a push and G and E on pull. The melodeon is as new. Price: £200 O.N.O Telephone David on 01772 454328 or see me at the club.

A few years ago we had a large number of promotional car window stickers and normal large stickers made for the club, we still have quite a few left, if you’d like to put one in your car window or you’d like to put a sticker on your accordion case, just ask myself or Rebecca for some when you come to the club, they are free! You may notice some of these car stickers in the windows of a few cars in the car park on club nights, the larger stickers are designed for sticking on to accordion cases.

The UK Accordion Championships are to be held at the Adelphi Hotel in Liverpool next year on the 27th – 29th April 2012, to compete in the UK championships you have to qualify in the area festivals first, the North West area festival is in November a specific date has not been set yet.

Childs accordion for sale, this has 22 keys on the right hand and 12 basses on the left. The accordion is not one of those unplayable toy accordions you see, it is a nice playable accordion suitable for a young child to learn on. Price £50. Telephone 01772 454328